1941 messages deliverd by pigeons from Holland

(c) Crown copyright images reproduced by courtesy of The National Archives, London, UK
Catalog numbers WO208/3560 #25, #26, #27
You may need to scroll left-right to read the documents.
Between 1941-45 the British conducted Operation Columba. 17,000 pigeons were dropped in small boxes attached to small parachutes into occupied France, Holland, and Belgium.  The British hoped those who found the pigeons would send them back with intelligence about the Germans.  The pigeons had several advantages over human couriers.  A pigeon couldn’t be interrogated.  A pigeon could fly silently at night behind enemy lines.  A pigeon didn’t need fake documents to proceed through German checkpoints.  Perhaps most importantly, a pigeon flies about 40-50 miles per hour.  Top speed for a pigeon is 60 miles per hour.  The pigeons could deliver intelligence faster than people.
Below are 2 messages.  Each message represents someone risking their life.  Sending a message with a pigeon was punishable by death under the German occupation. 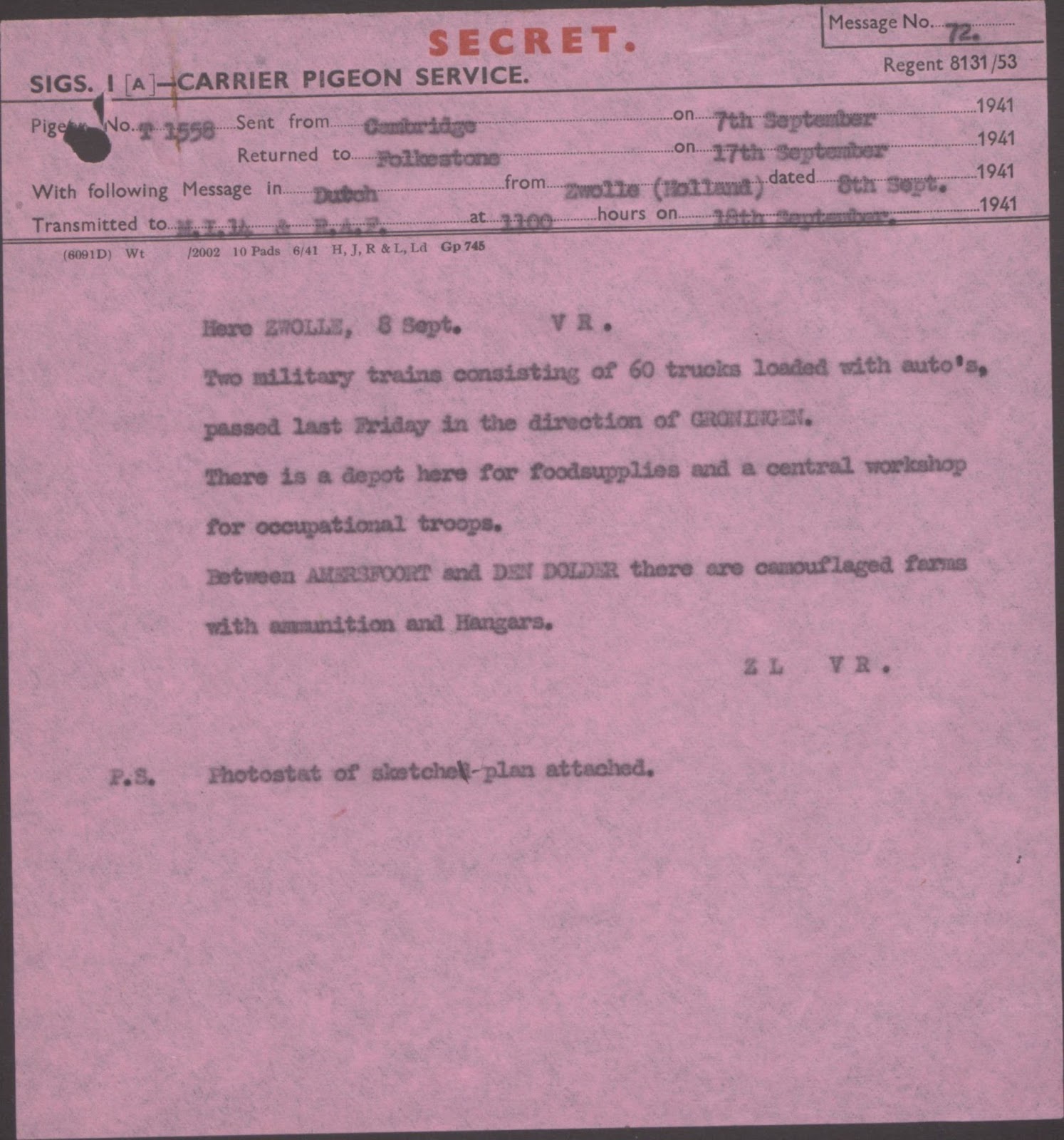 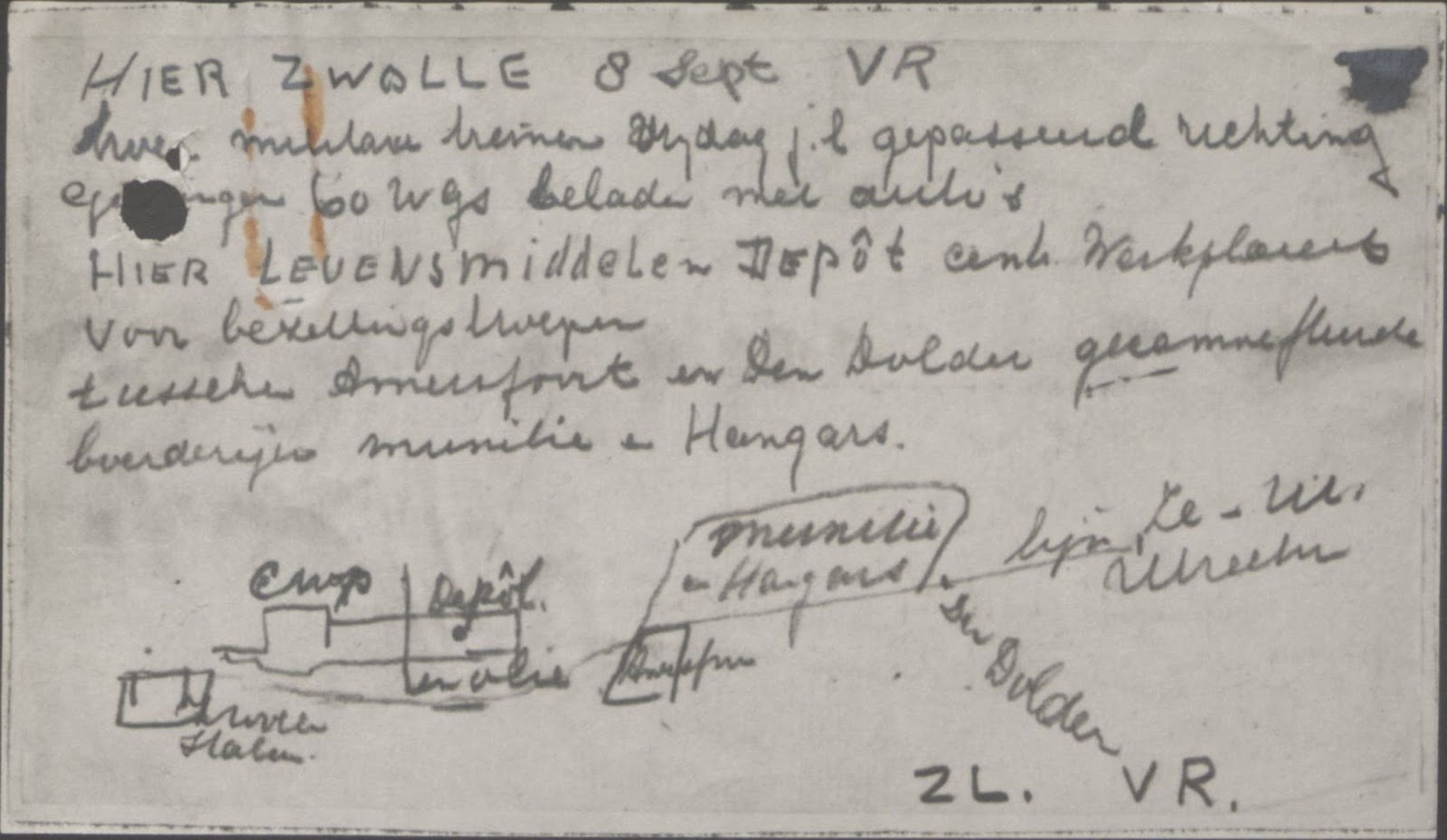 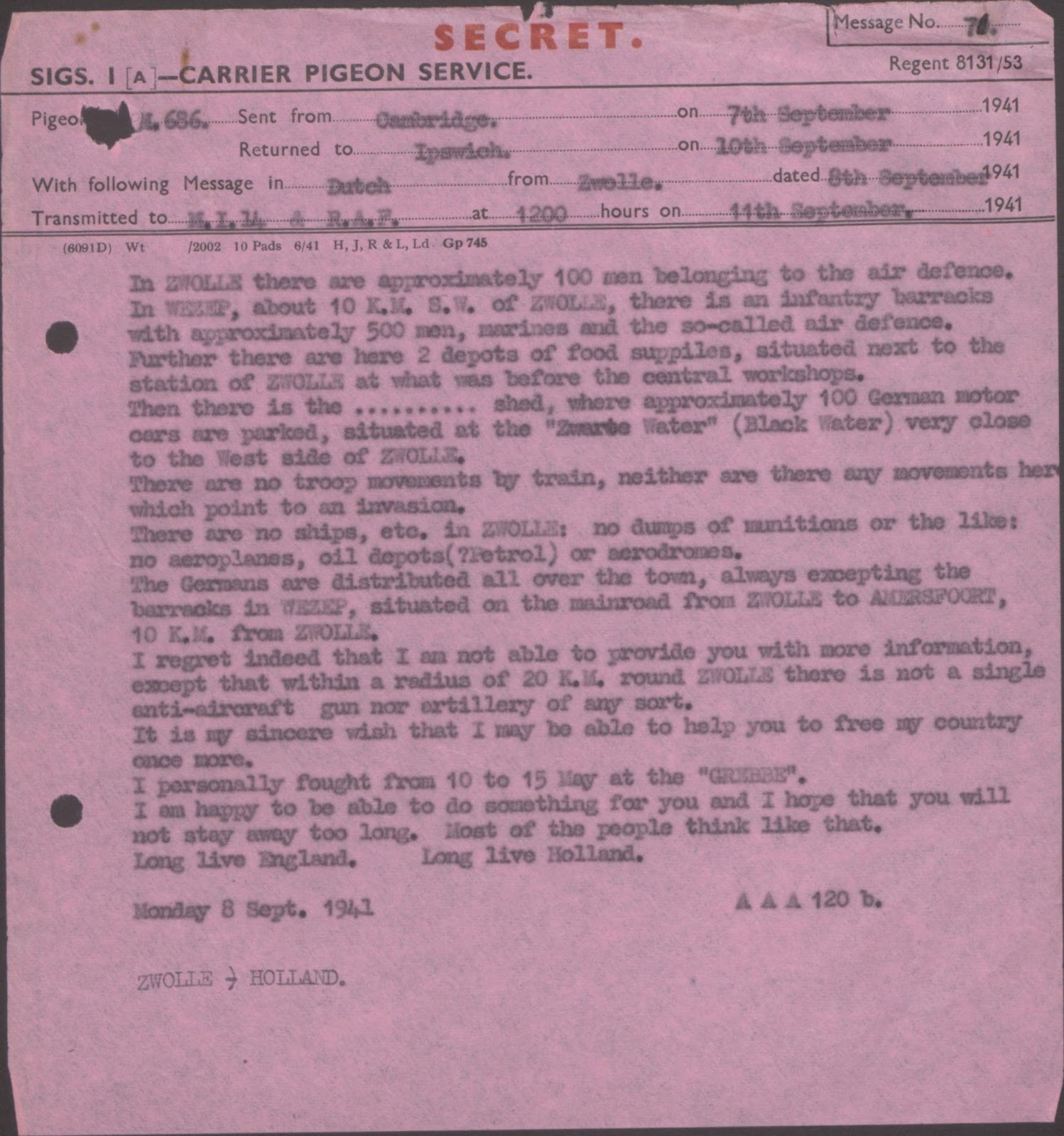 Posted by Jennifer Spangler at 10:05 AM No comments:

Operation Columba-Plans for Invasion of the Continent

(c) Crown copyright images reproduced by courtesy of The National Archives, London, UK
Catalog numbers WO206/3556 #57, #58, #59, #60, #61, #26, #27
This is Columba Summary #11 1943.  It covers plans for pigeons during the invasion of the continent.  When a bridgehead was established, training of pigeons would begin locally.  Mobile pigeon sections would each hold 720 pigeons.  The pigeons would be available for all requirements in the theatre of operations.  A reserve of 1400 pigeons would be held in Britain to replenish mobile pigeon section lofts.
Some other points in this summary:
Civilian loft owners were commended for their willingness to give their best pigeons to the Special Pigeon Service,
Improved cardboard containers to hold the pigeons when they were dropped by parachute into occupied Europe increased the number of pigeons who returned with messages,
Accuracy of dropping the pigeons was developed into a fine art by the special R.A.F. Squadrons,
Monthly output of pigeons dropped was increased from 500 to approximately 1000; these pigeons were needed to gather information on German anti-invasion preparations in the west.
Also included in this summary are statements on the value of the Special Pigeon Service by Jonathan Griffin, European Intelligence Director at the B.B.C., Air Intelligence, Major R.I. Dobson of S.O.E., and P.I.D. 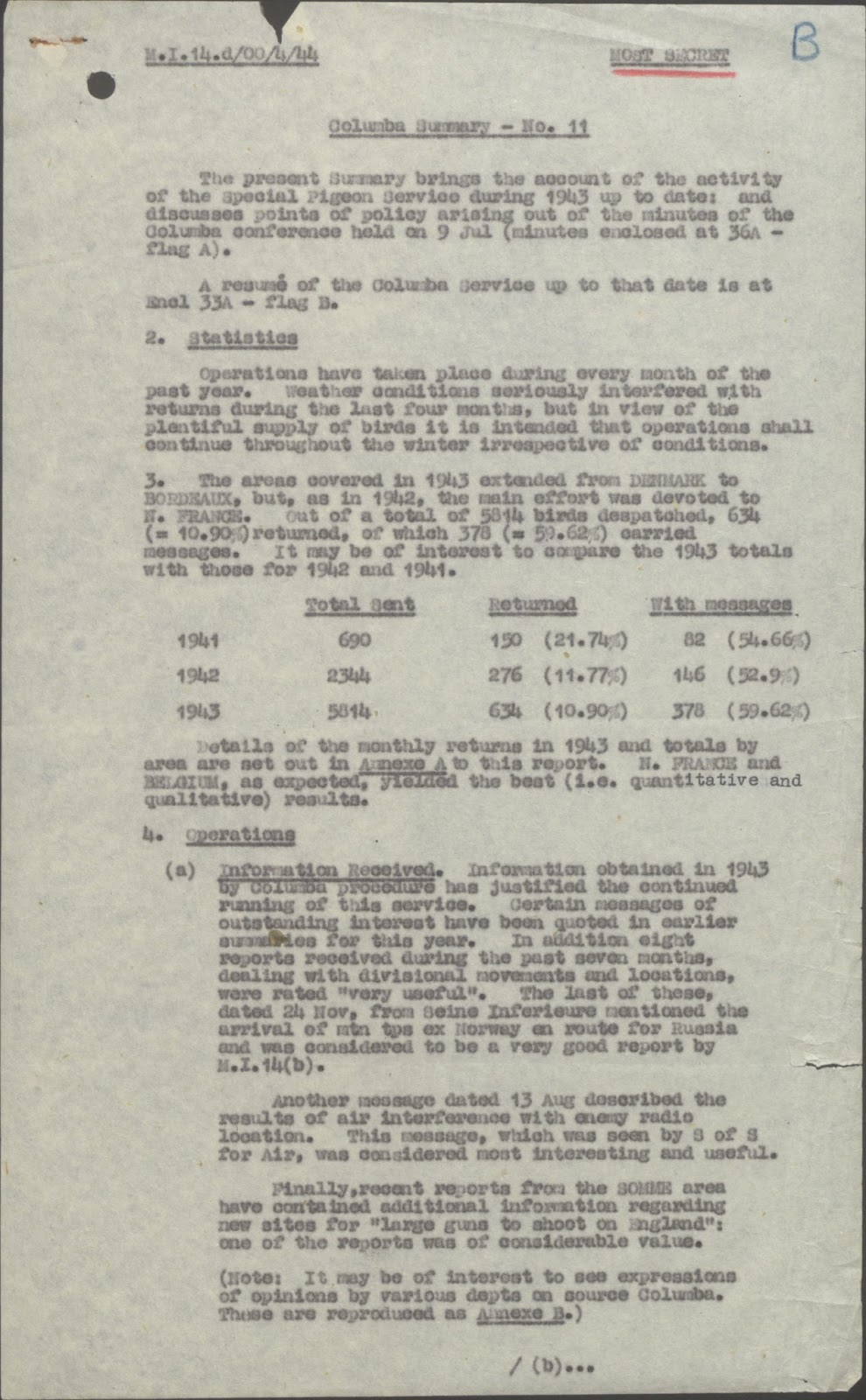 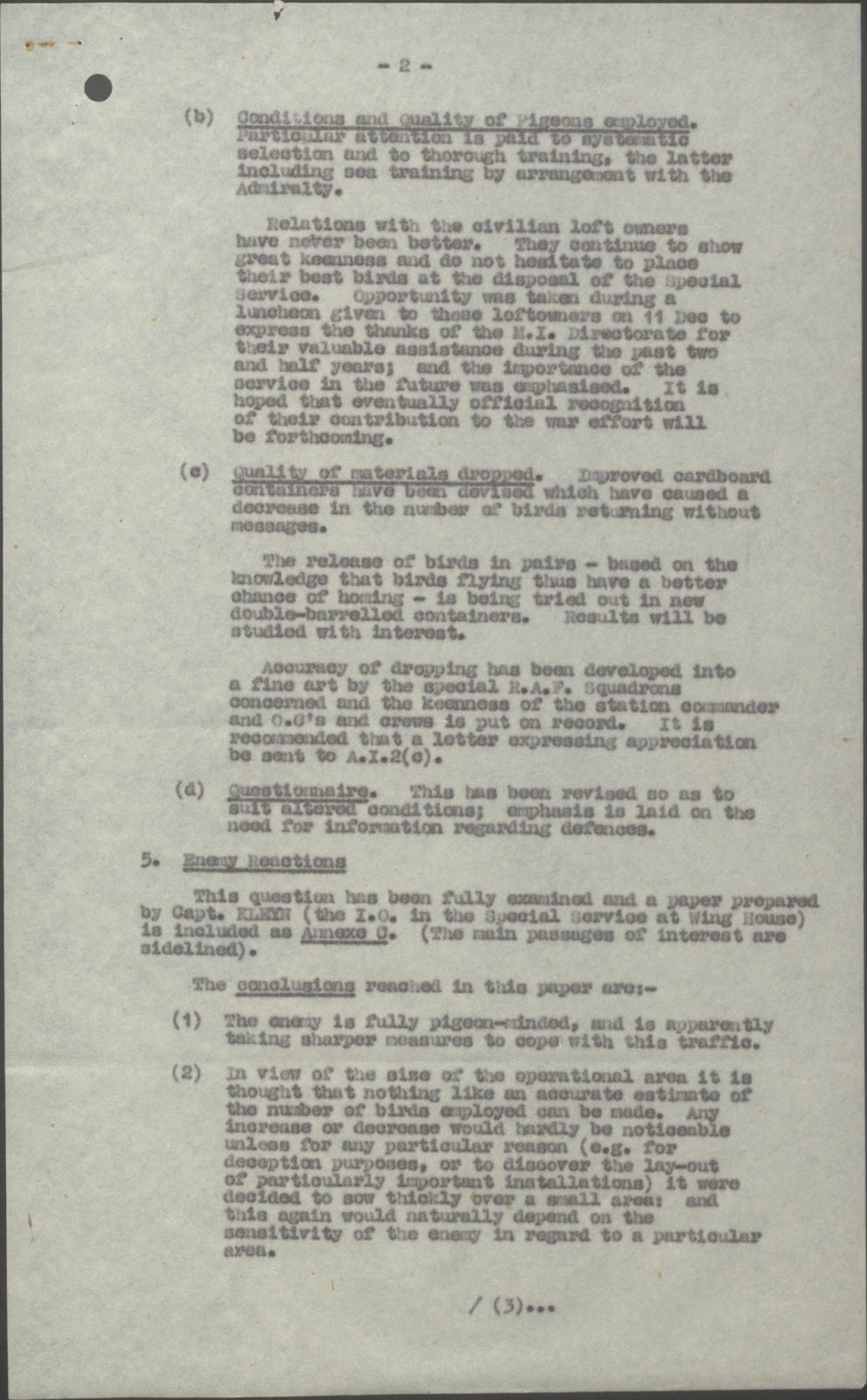 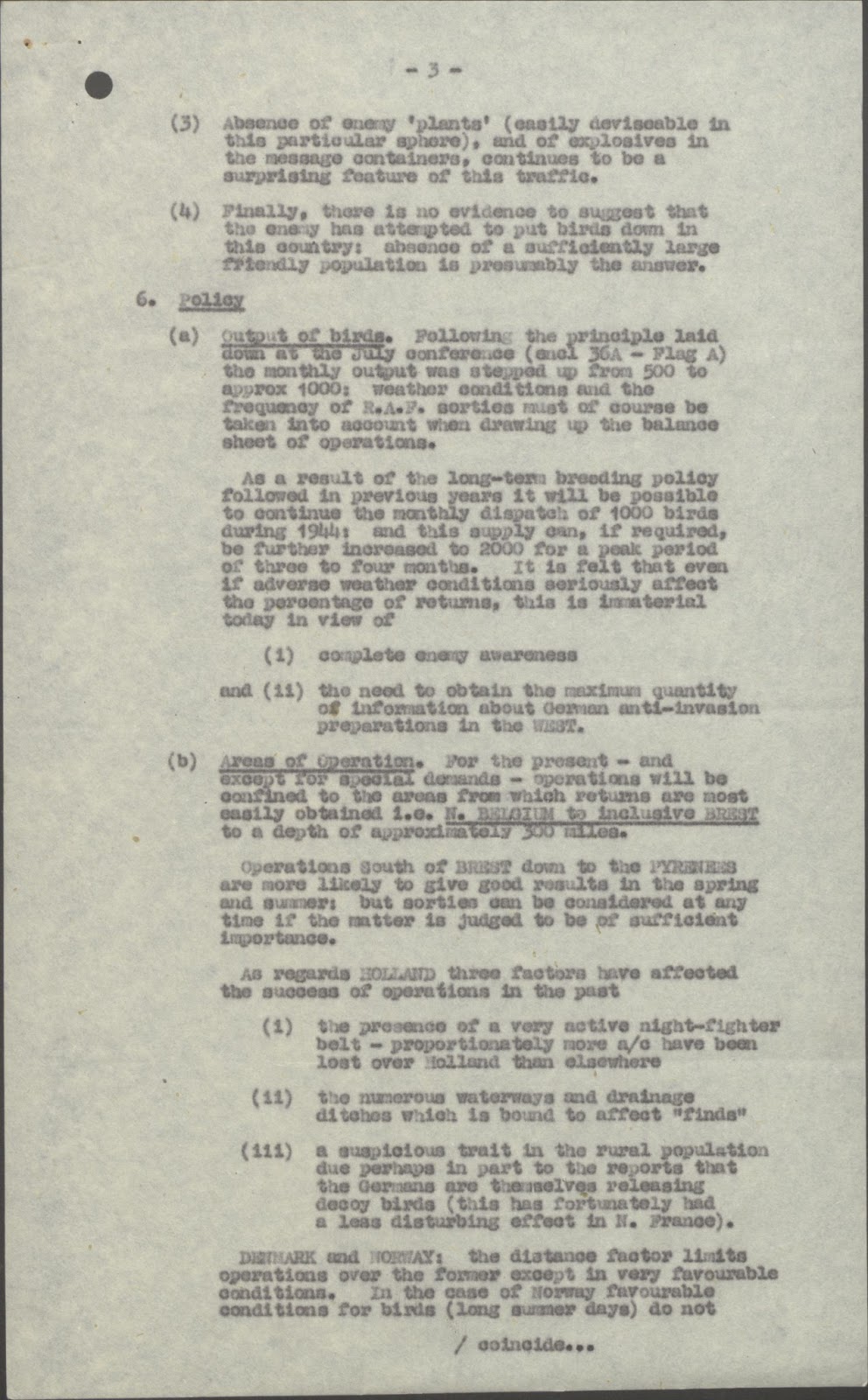 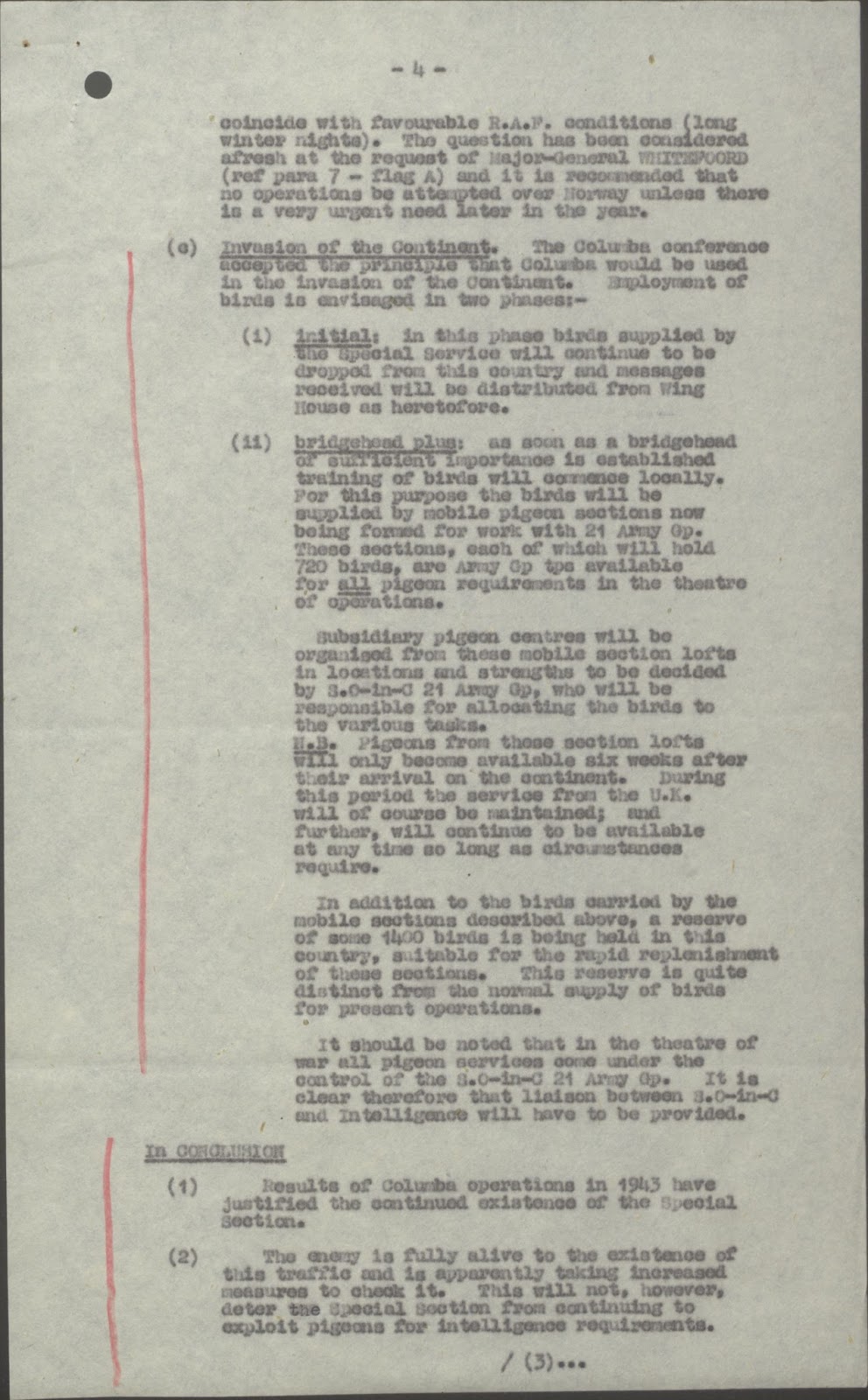 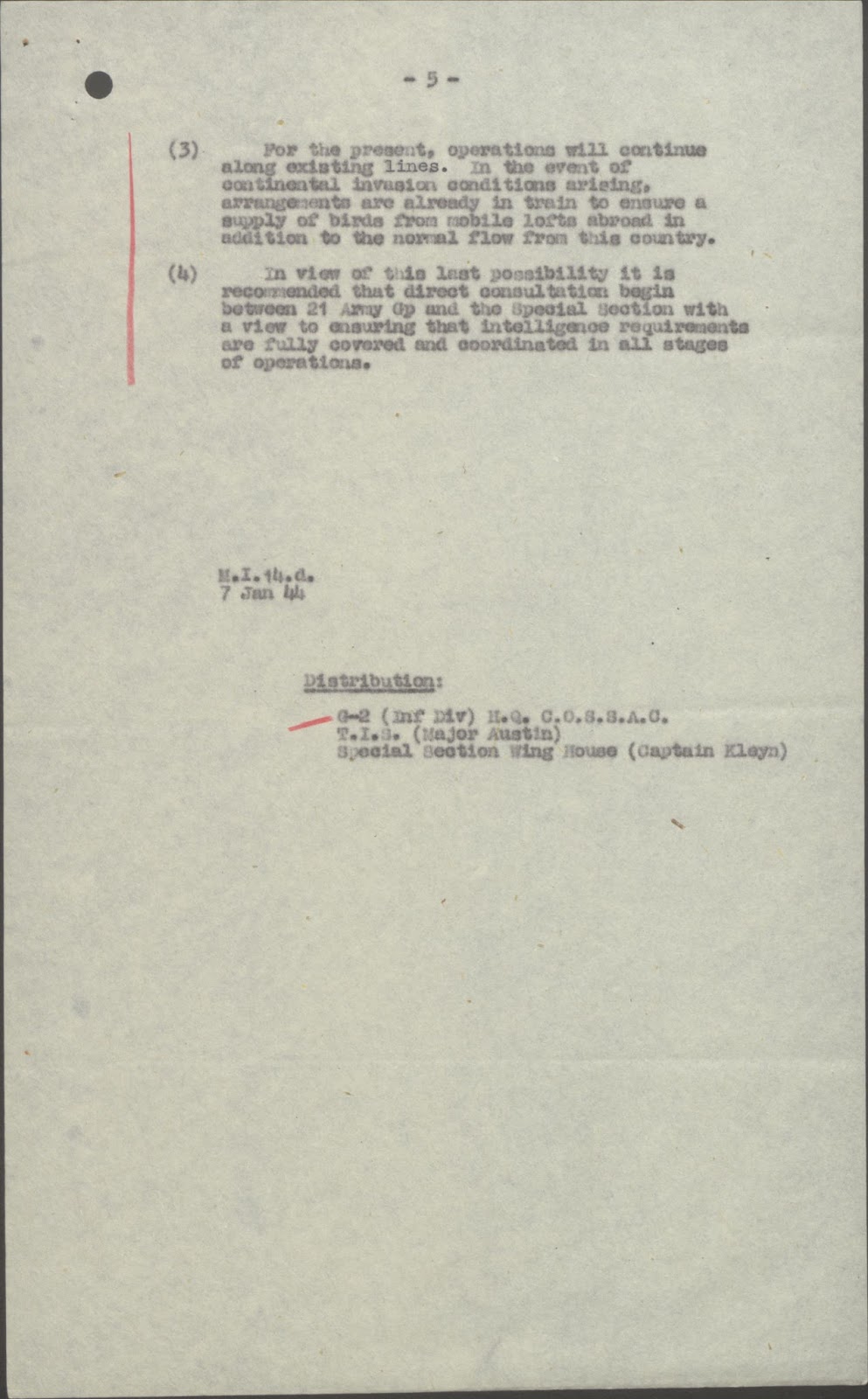 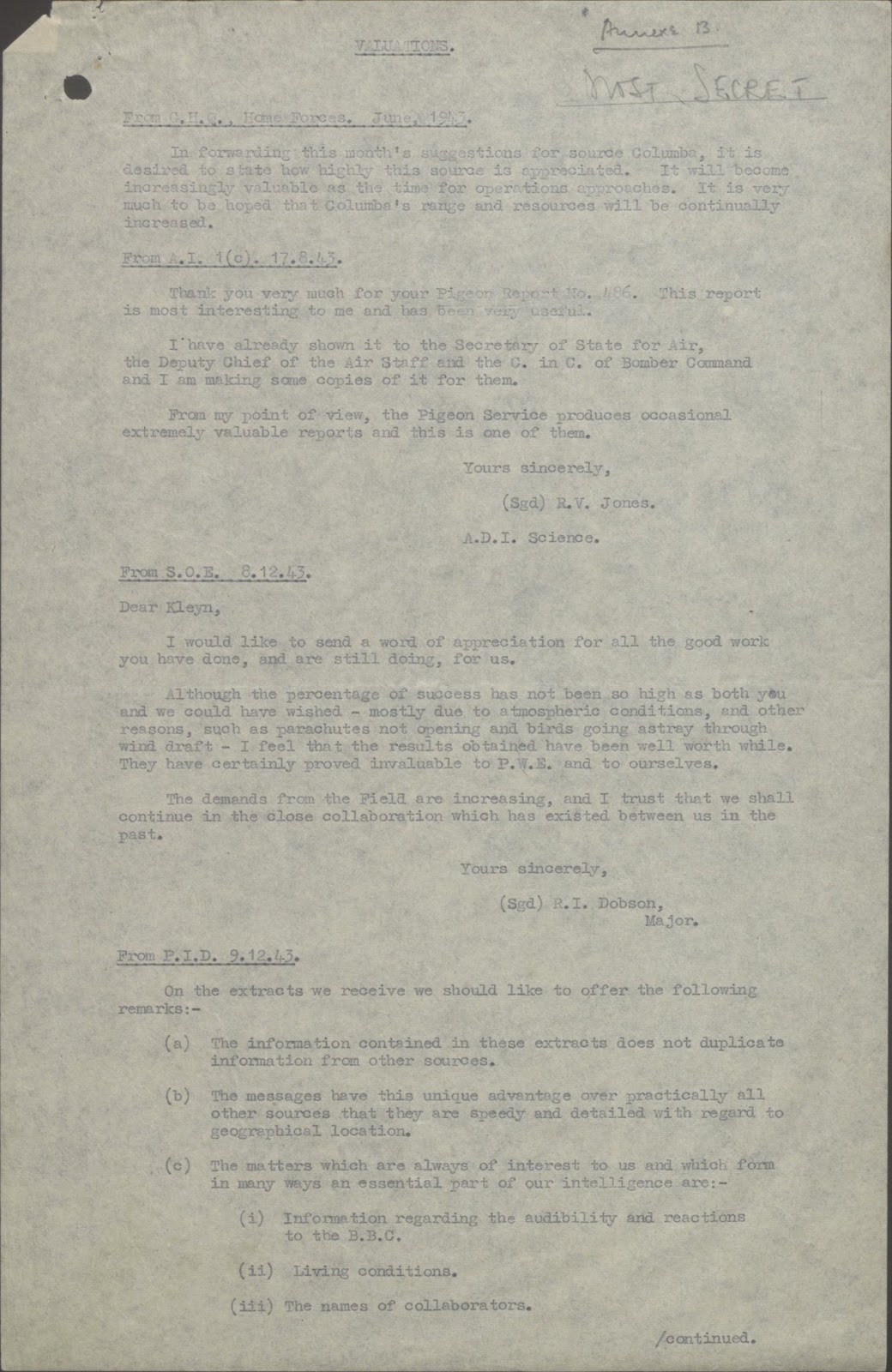 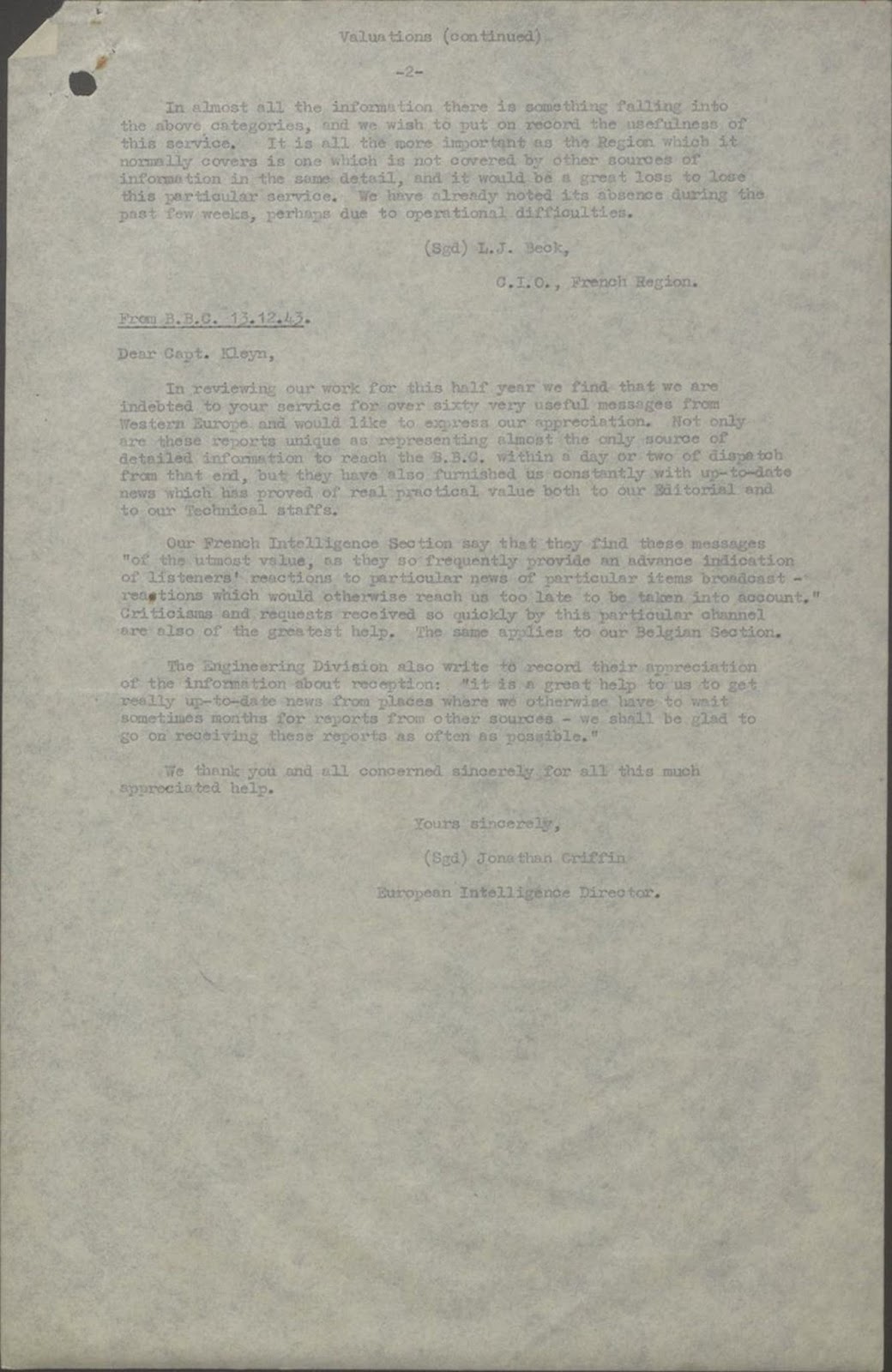 Posted by Jennifer Spangler at 12:43 PM No comments:

(c) Crown copyright images reproduced by courtesy of The National Archives, London, UK
Catalog numbers WO208/3556 #51, #52, #53
This post includes Columba Summery #12 for the first 6 months of 1944.
Points in the summary:
Returns were low but considered critical during the pre-invasion period;
4424 pigeons were dropped by parachute;
Operation Columba provided the first intimation of  “order of battle” news considered important to SHAEF regarding German troop movements;
5 reports gave the first news of military underground works;
Names of collaborators were sent to SHAEF, per their request;
After the invasion began the Germans offered big rewards for the capture of Allied pigeons;
In Denmark, pigeon owners were given the choice of killing their pigeons or turning them over to the Wehrmacht. 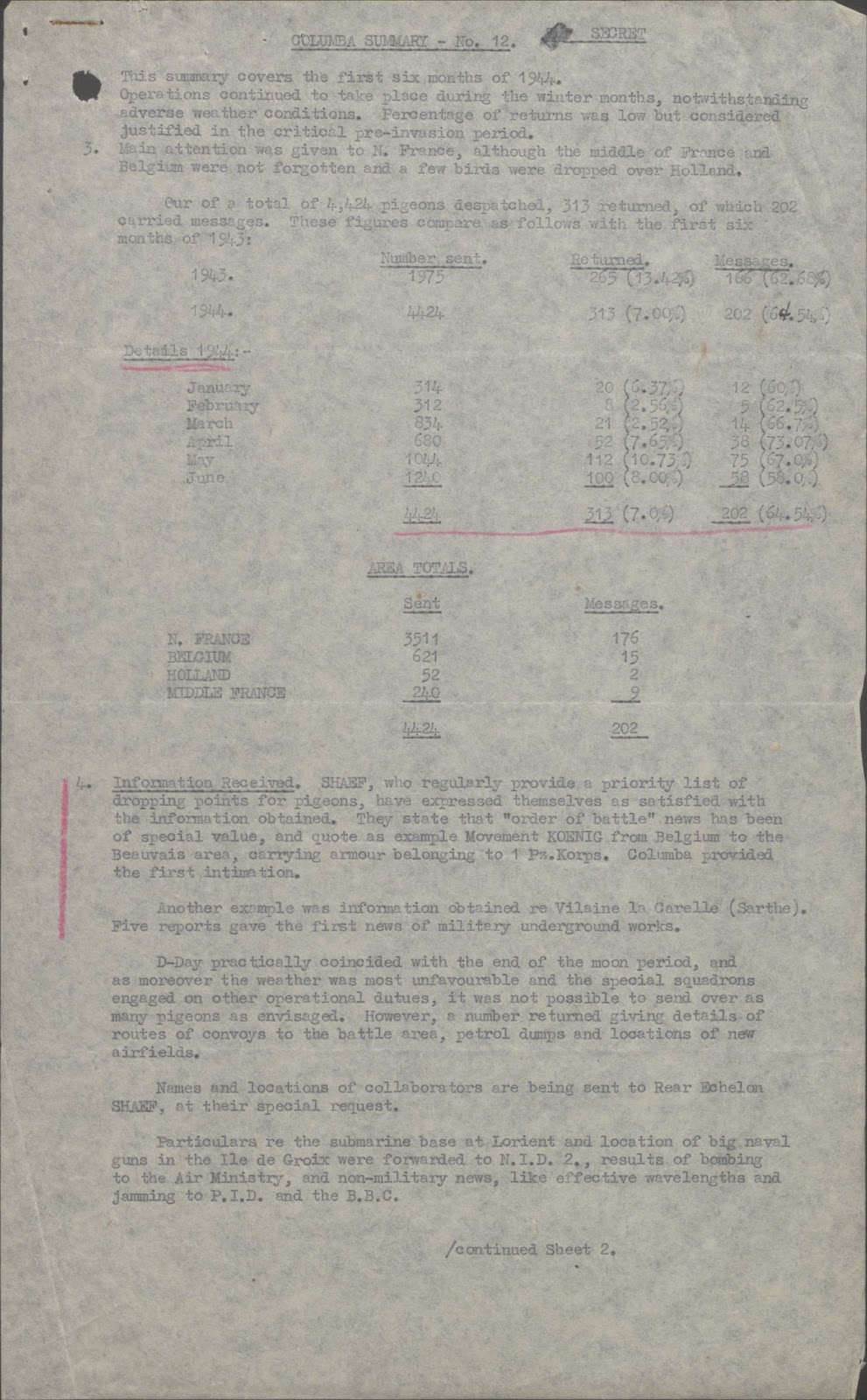 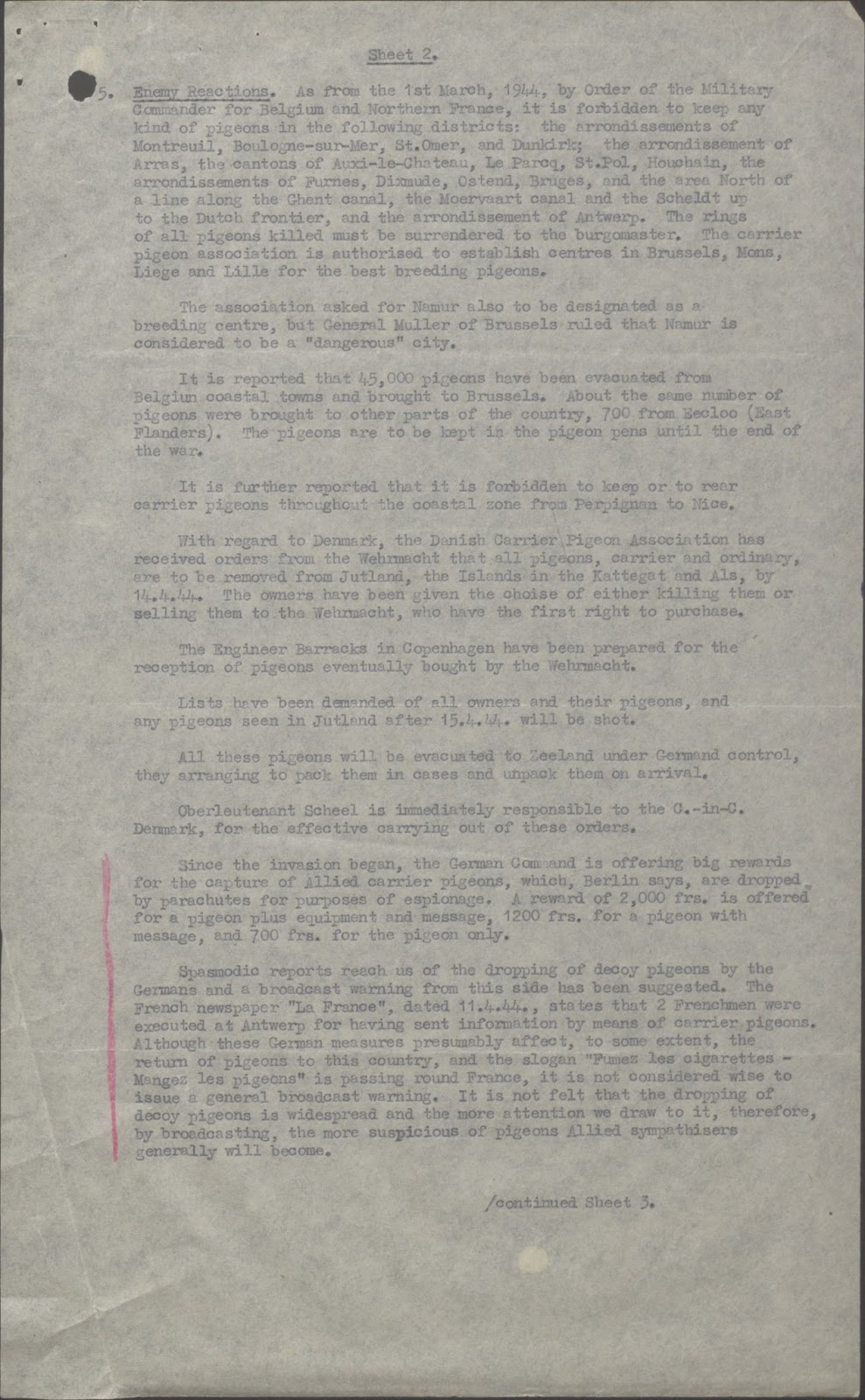 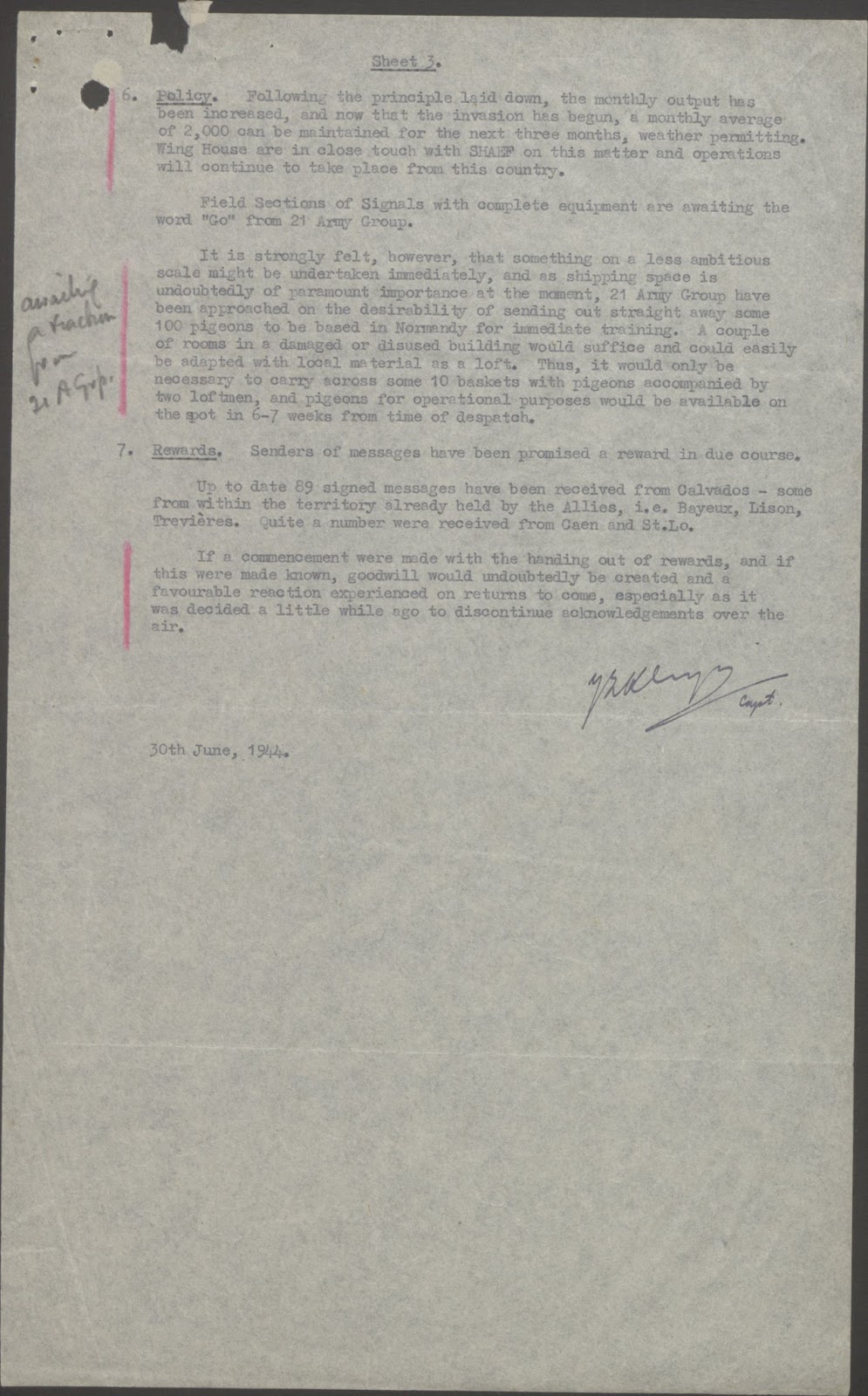 Posted by Jennifer Spangler at 3:39 AM 2 comments: