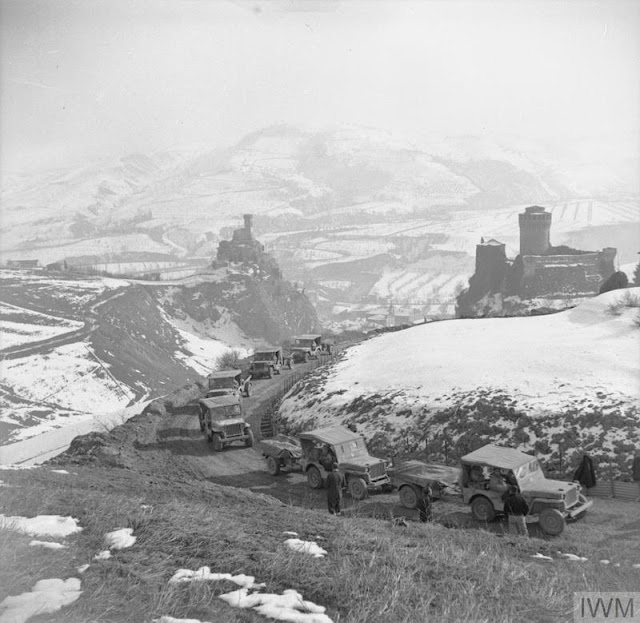 The British Army in Italy 1945
A Jeep supply train wends its way up a steep road over the Monte Di Rontana with 75mm and 3.7-inch ammunition for 85th Mountain Regiment, Royal Artillery, 2 February 1945. The ammunition was transferred to mules for the final part of the journey. The guns were firing at German positions in Isola.  Photo by Sergeant Menzies, No. 2 Army Film & Photographic Unit.  © IWM (NA 22042)
This is an excerpt from The Pigeons That Went to War by Gordon H. Hayes.  Hayes is recalling his experiences with the pigeons during the invasion of Italy
“This reminds me of the times when the birds were entrusted with special assignments by the Allied Forces.  What follows is an account of possibly the most difficult of them all:
It was early January, 1945, in the Italian alps.  The British 8th Army was caught in the jaws of a blizzard, blustering and brutal.  The troops were in action on a wide front.  But cold was becoming bitter and forbidding.  All means of communication were paralyzed.  Drifts of snow and ice---12 feet deep---rendered movement impossible.  Communication lines lay buried.  It was impossible to find them, let alone repair them.  The chilling weather had affected the radio communication damagingly…so that our radio relays were open to all ears.
As a last resort, therefore, a special call was made for our pigeons.  But we were hesitant, apprehensive that the stinging cold and the stunning blizzard would freeze our birds to death, or that their legs would be frozen or frost-bitten.  However, we agreed, albeit reluctantly, to brush aside our anxieties and abide by the imperatives of the exigency.  We knew that the maneuvers of the British division would have a significant bearing on the course of the war.  Hence we were duty bound to contribute our share.
This realization led to the organization of a special task force consisting of Harold Tagert (the Vhip), Ed Bradlo and Roman Bradlo, Rusty Hemsath, and Walt Haid.  The Vhip, our leader, had the combat mobiles pulled to the front.  We had the night as our cover.
The event, remembered by Rusty Hemsath, reads in retrospect ‘…   the intense cold almost froze us to death, but we made it without any loss of life.’
After just two days the pigeons were ready for action.  So each battalion of the British brigade was given a flight of pigeons on the fourth day.  The fifth morning of their arrival, i.e. just the second day of their draft, the birds began bringing urgent and secret messages.  Tearing their way through blinding blizzards, their eyes blazing, feathers snow-shrouded, these doughty birds delivered the goods.  And what birds they were!  How would we ever forget them?  We could not then and cannot now.  After almost half a century, their courage must give us pause to wonder if there is an affinity among all living things.  Our birds were fighting, as we were.  They died, as many of my comrades did.  We were called to war and we came as did our valiant feathered friends.  There can be nothing nobler in human existence than to do one’s duty.  Perhaps those pigeons understood that better than we did---or do now.  It might be that the fight for a free world was a concept that they who knew the limitless sky and oceans of unbounded air could imagine.  It may be our mistake to mourn those who were lost---pigeons and men---for they have their honor.  No more beautiful orison could be sung than that they knew their duty and did it.  Amen. “ 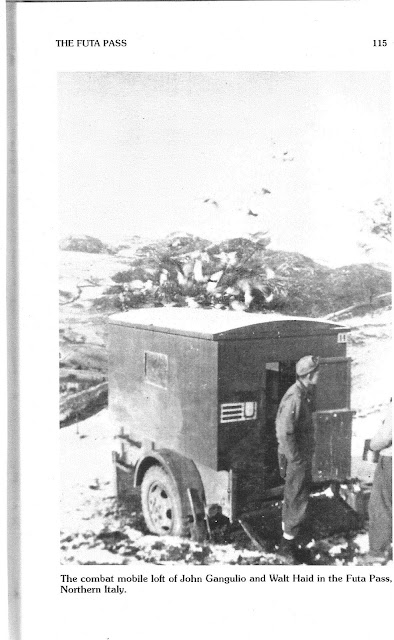 Photo courtesy of the Hayes family.
You can use the scroll bar at the bottom to scroll left-right and view the larger photo. 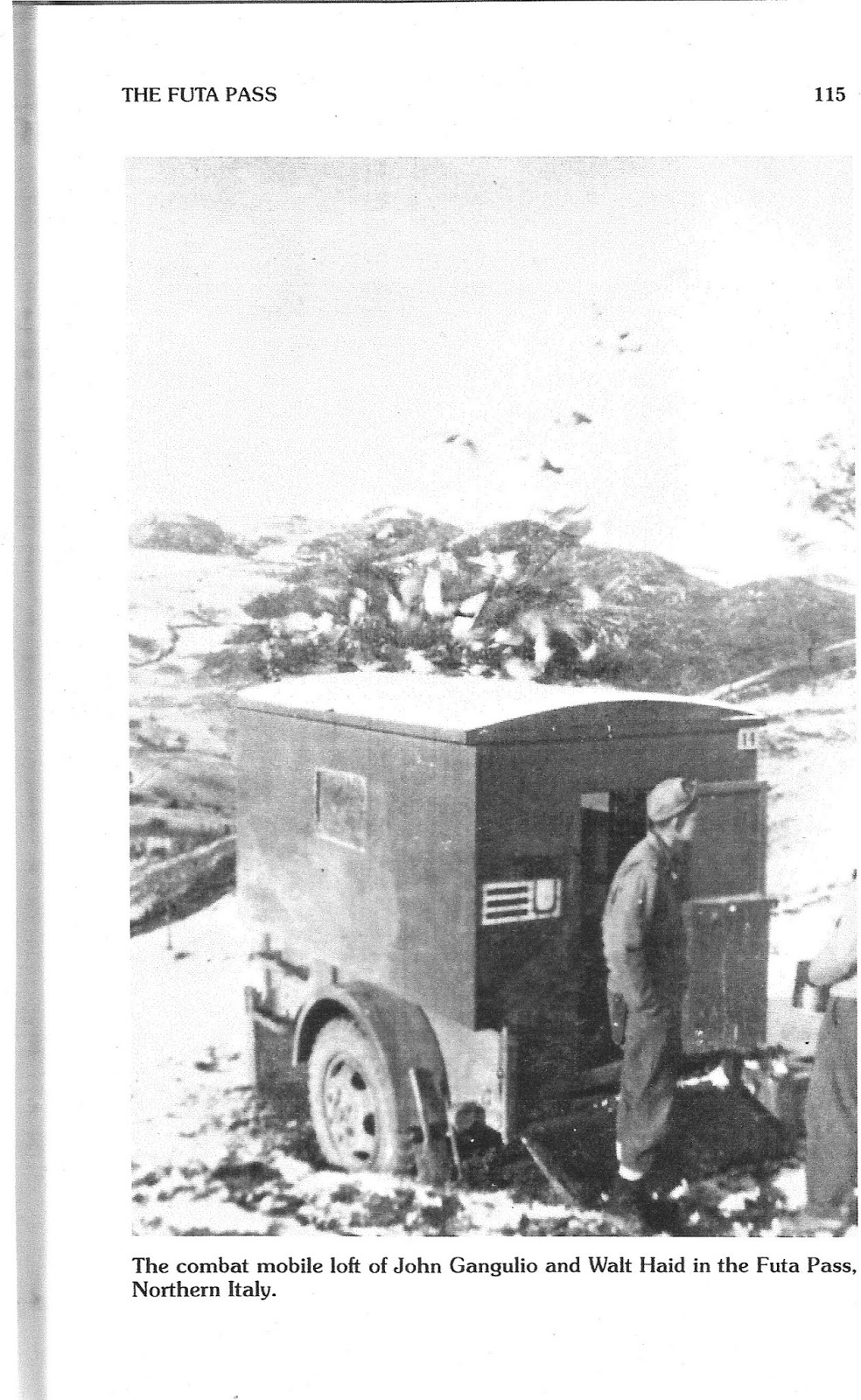 Posted by Jennifer Spangler at 12:47 PM No comments:

Honoring a veteran and a pigeon historian, Frank Quatrochi

Frank Quatrochi served as a pigeoneer during the Korean War.  He donated this sketch of Kaiser, which he acquired while at Fort Monmouth, as well as the photos and documents from his personal collection. You can use the scroll bar at the bottom to scroll left-right and bring the entire photo or doc onto the screen.  To hear an interview with Frank, you can go to soundcloud.com and enter Frank Quatrochi, Korean War pigeoneer in the search box in the center top of the page or use this link https://soundcloud.com/search?q=frank%20quatrocchi%2C%20korean%20war%20pigeoneer 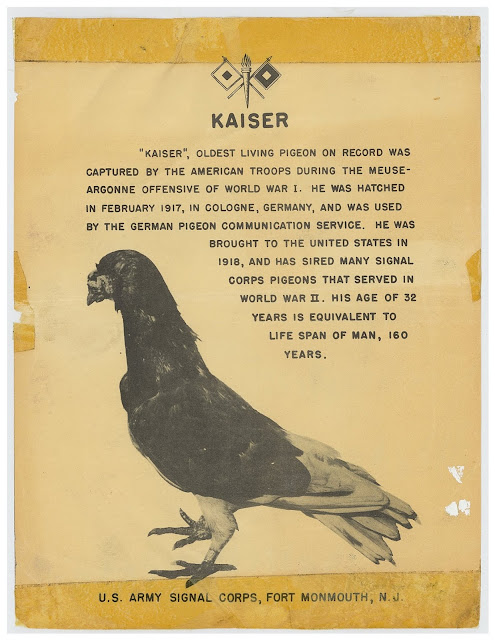 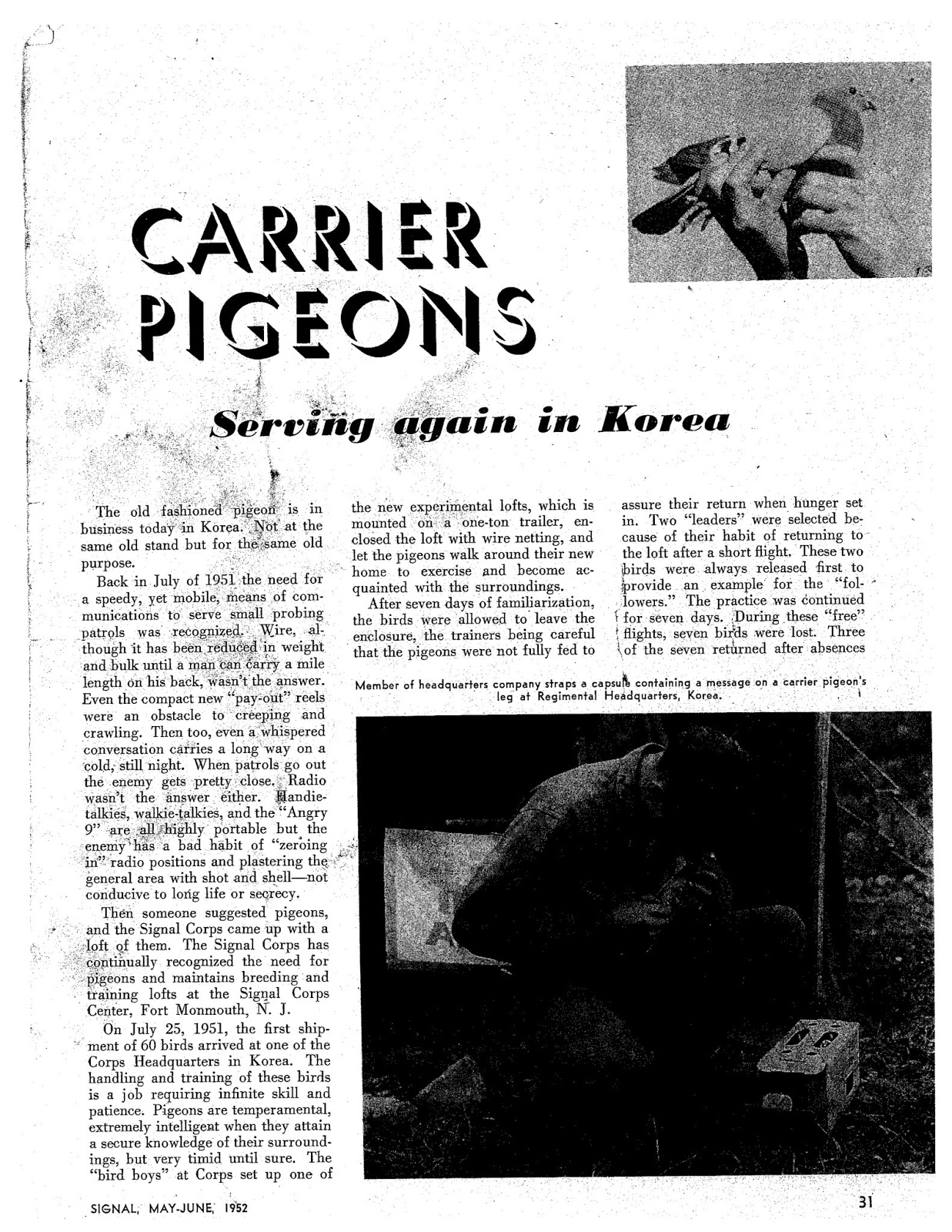 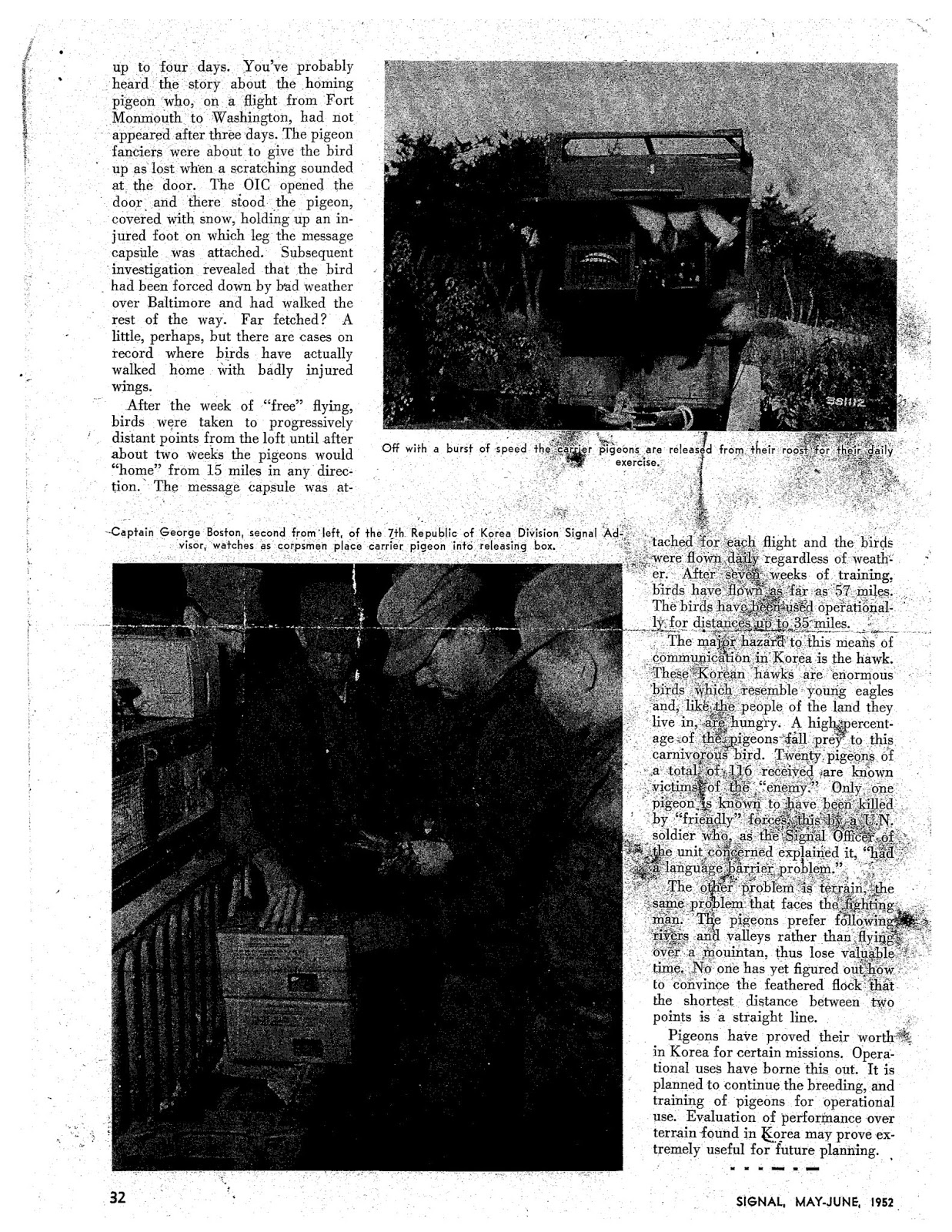 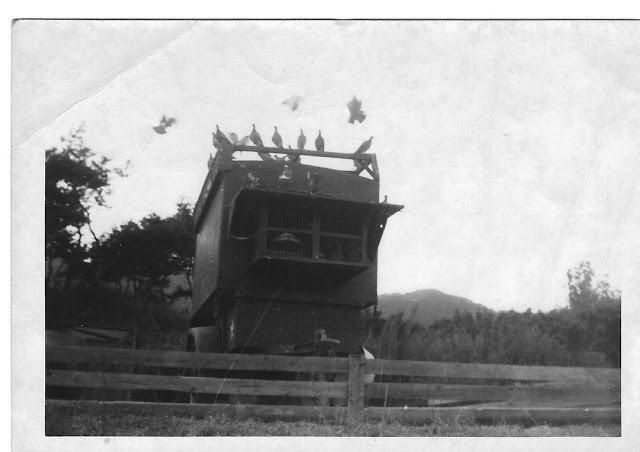 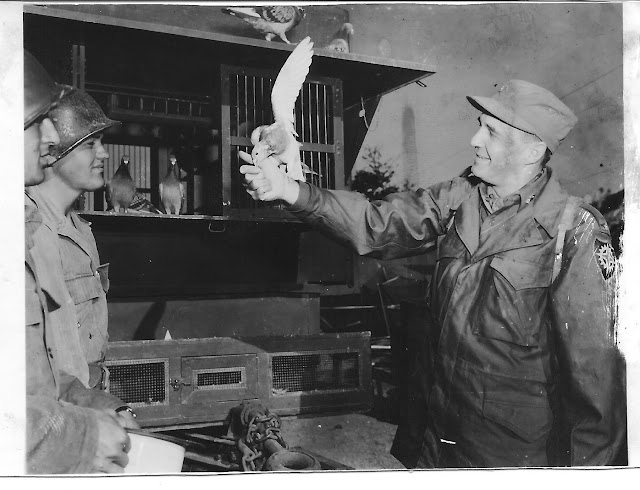 Cpl.Quatrochi in his pigeon loft 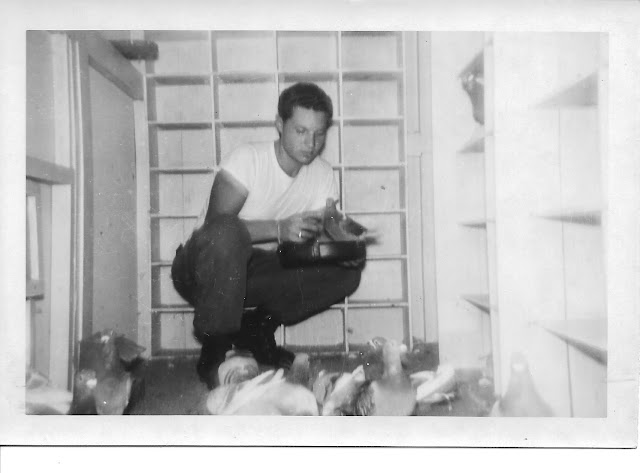 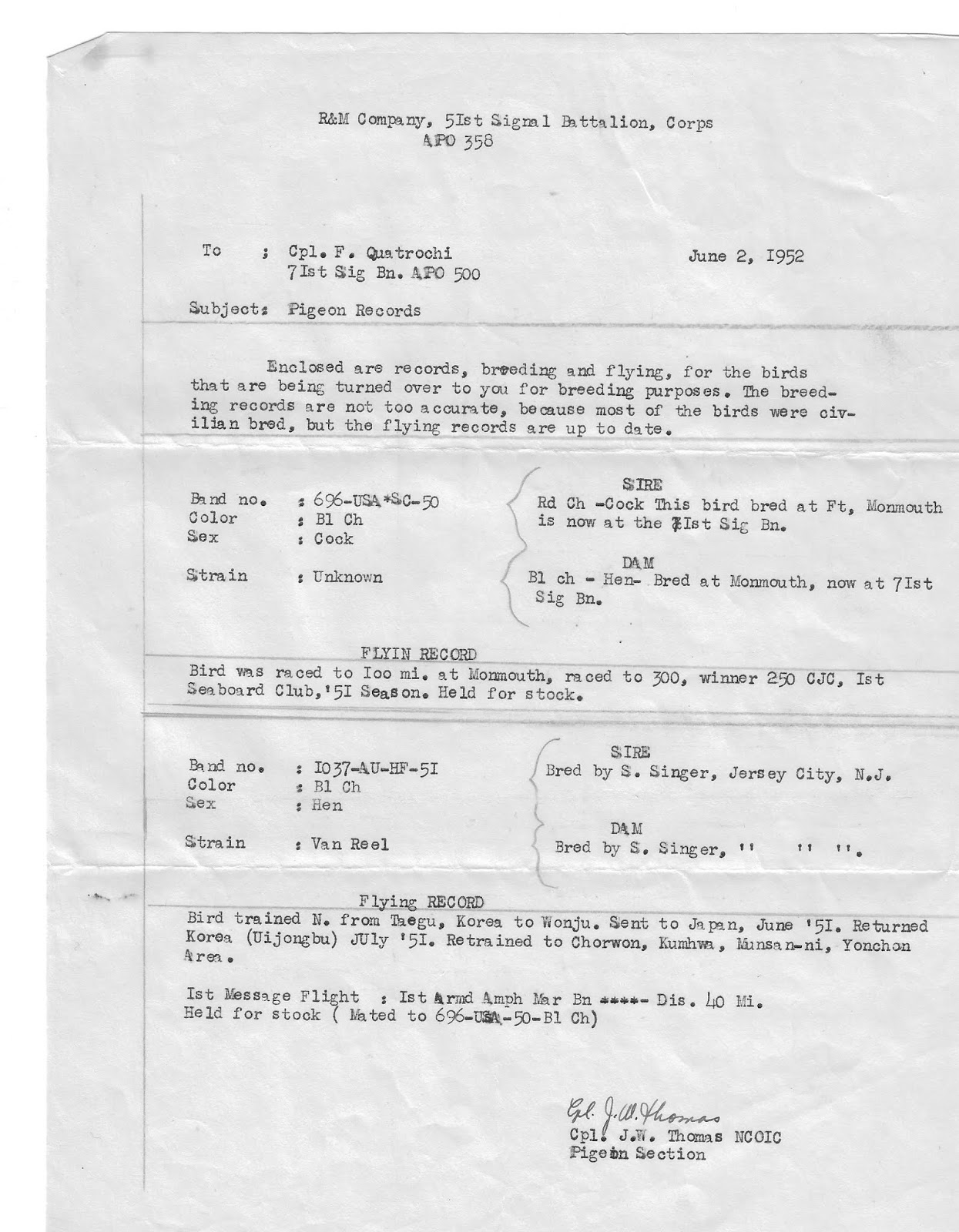 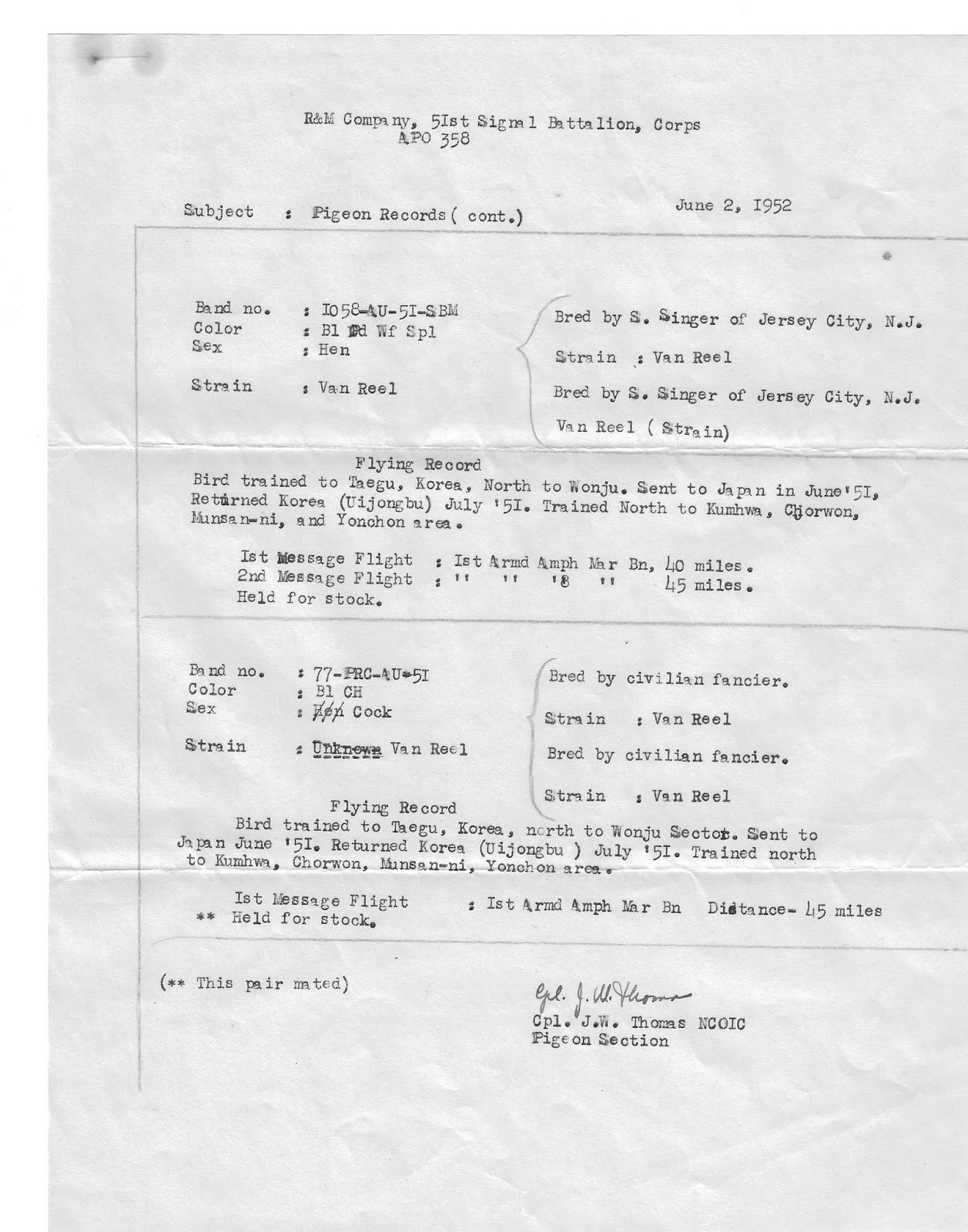 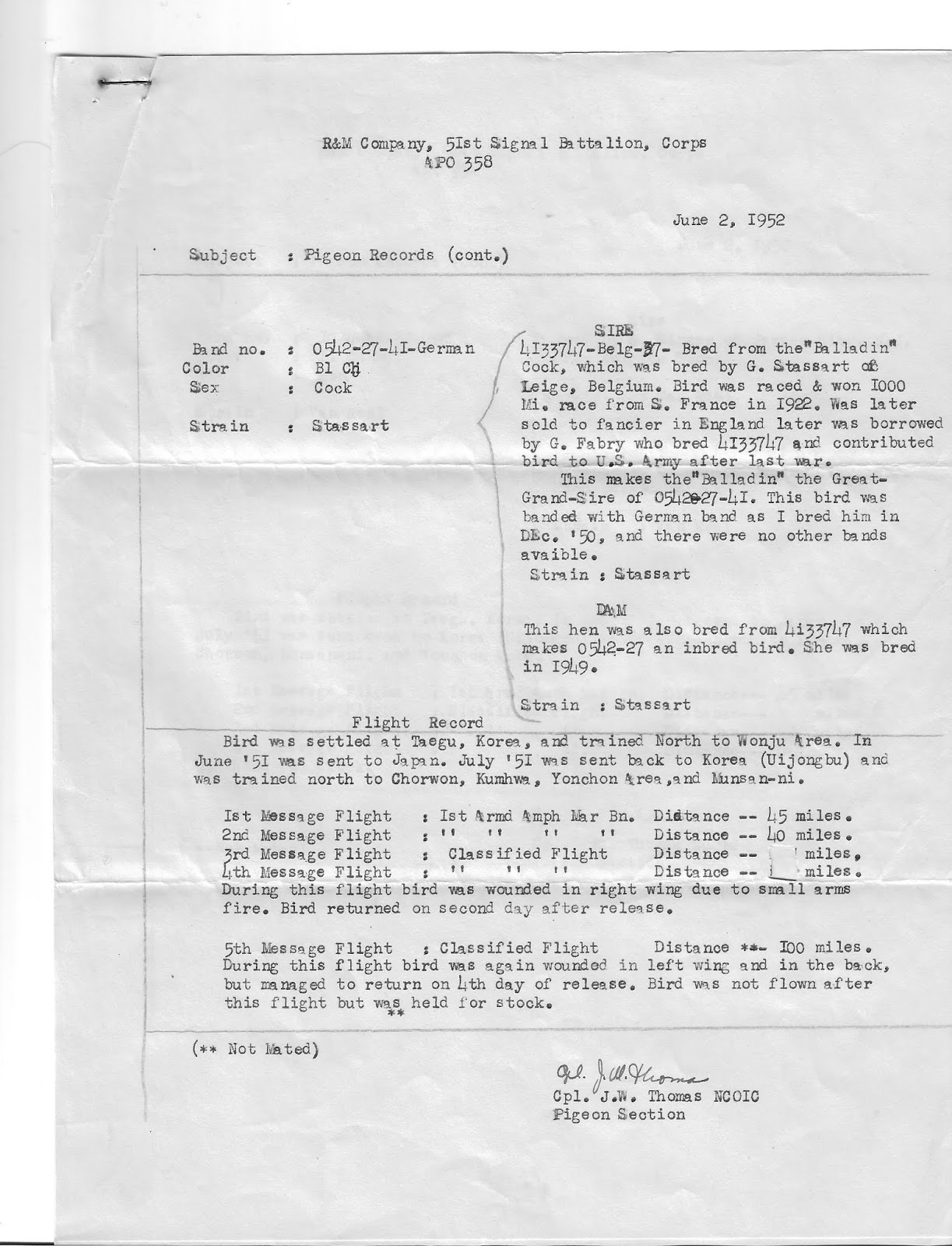 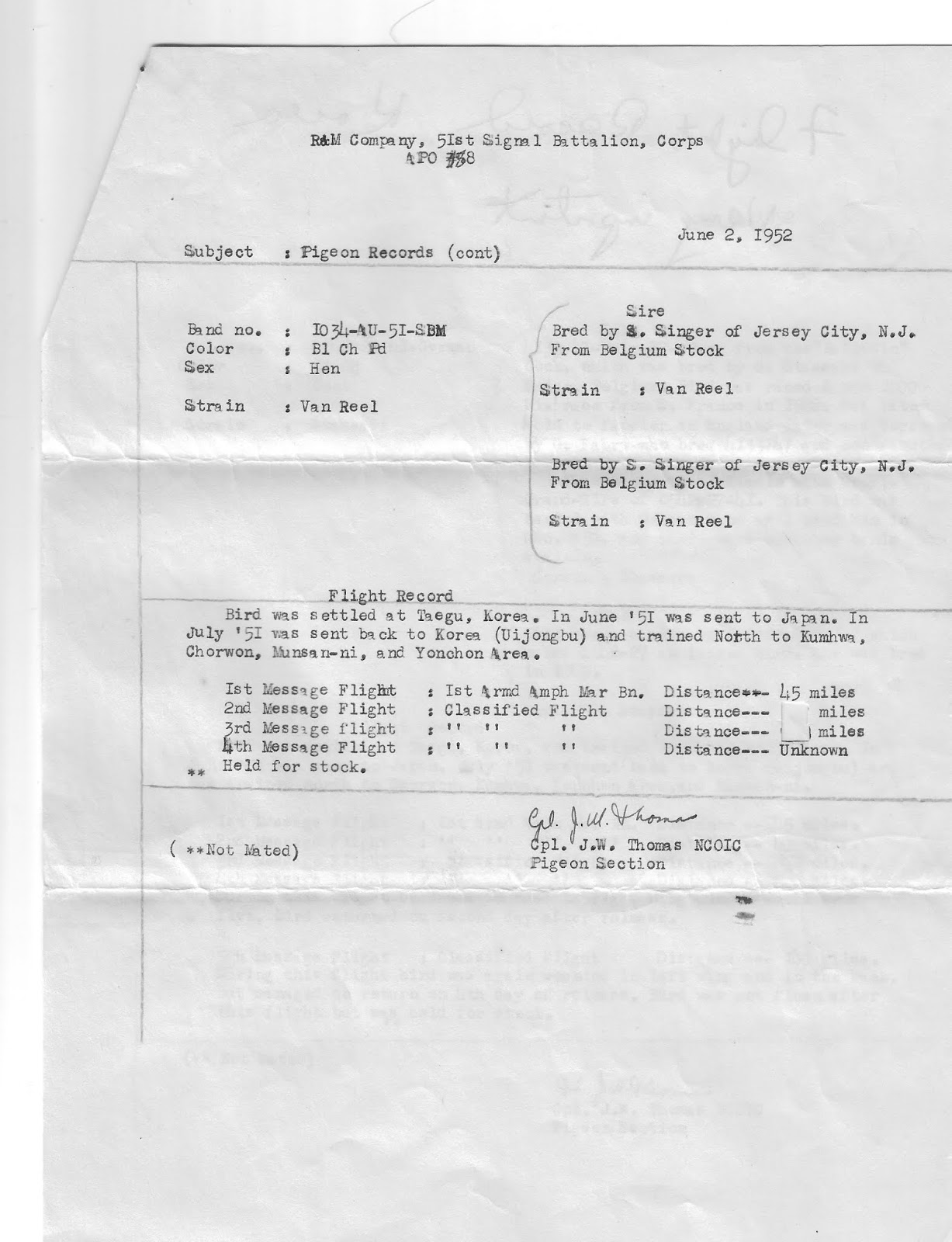 Robin Hutton published War Animals in 2018.  She writes, “In 1941, Major Otto Meyer assumed command of the Signal Pigeon Corps.  Meyer ran the worldwide pigeon breeding and training program and supervised the writing of the pigeon bible---Army Technical Manual No.  11-410, The Homing Pigeon, as well as Field Manual 11-80, Pigeons for Combat Use.”

Below is Cpl. Quatrochi’s letter to Otto Meyer. 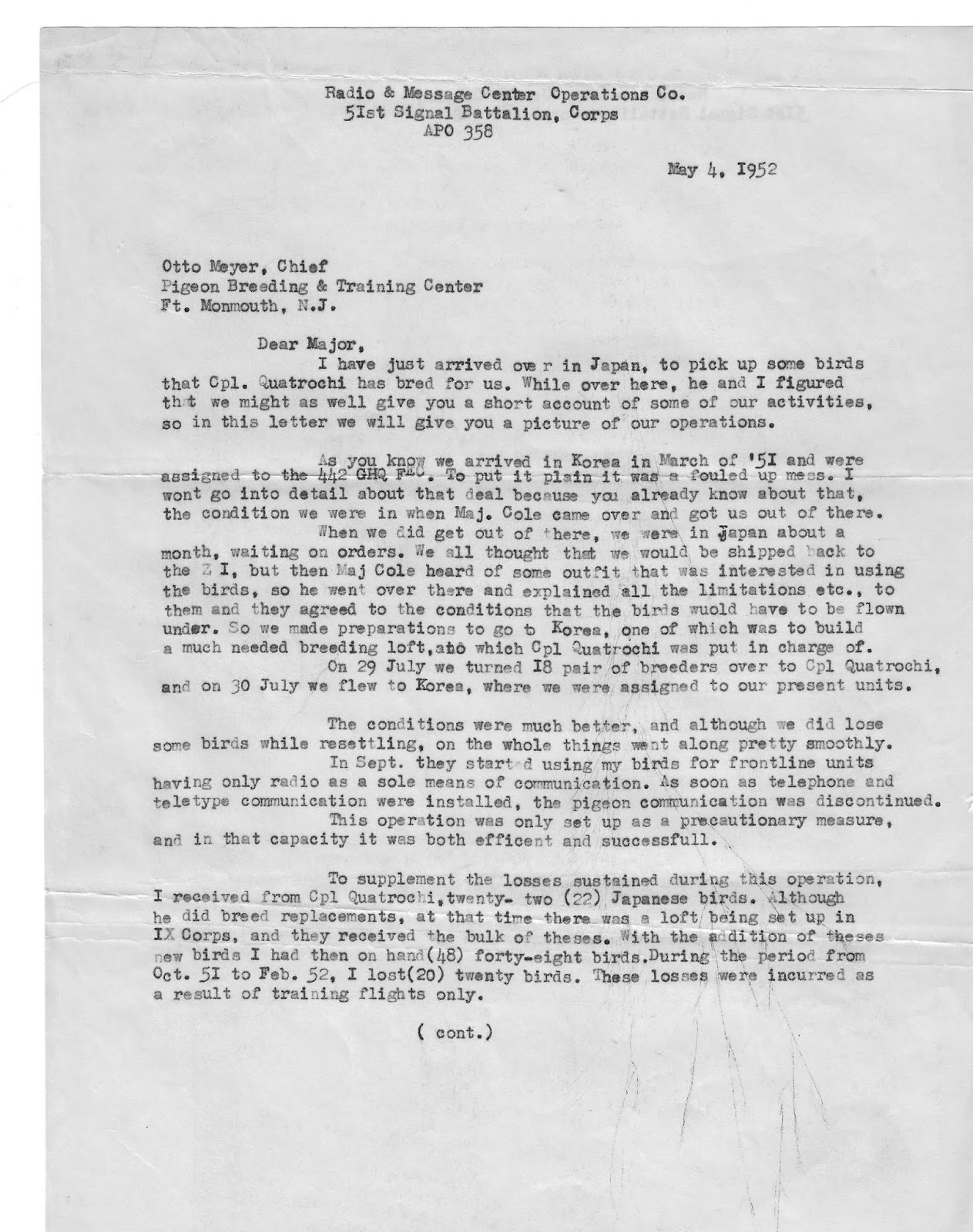 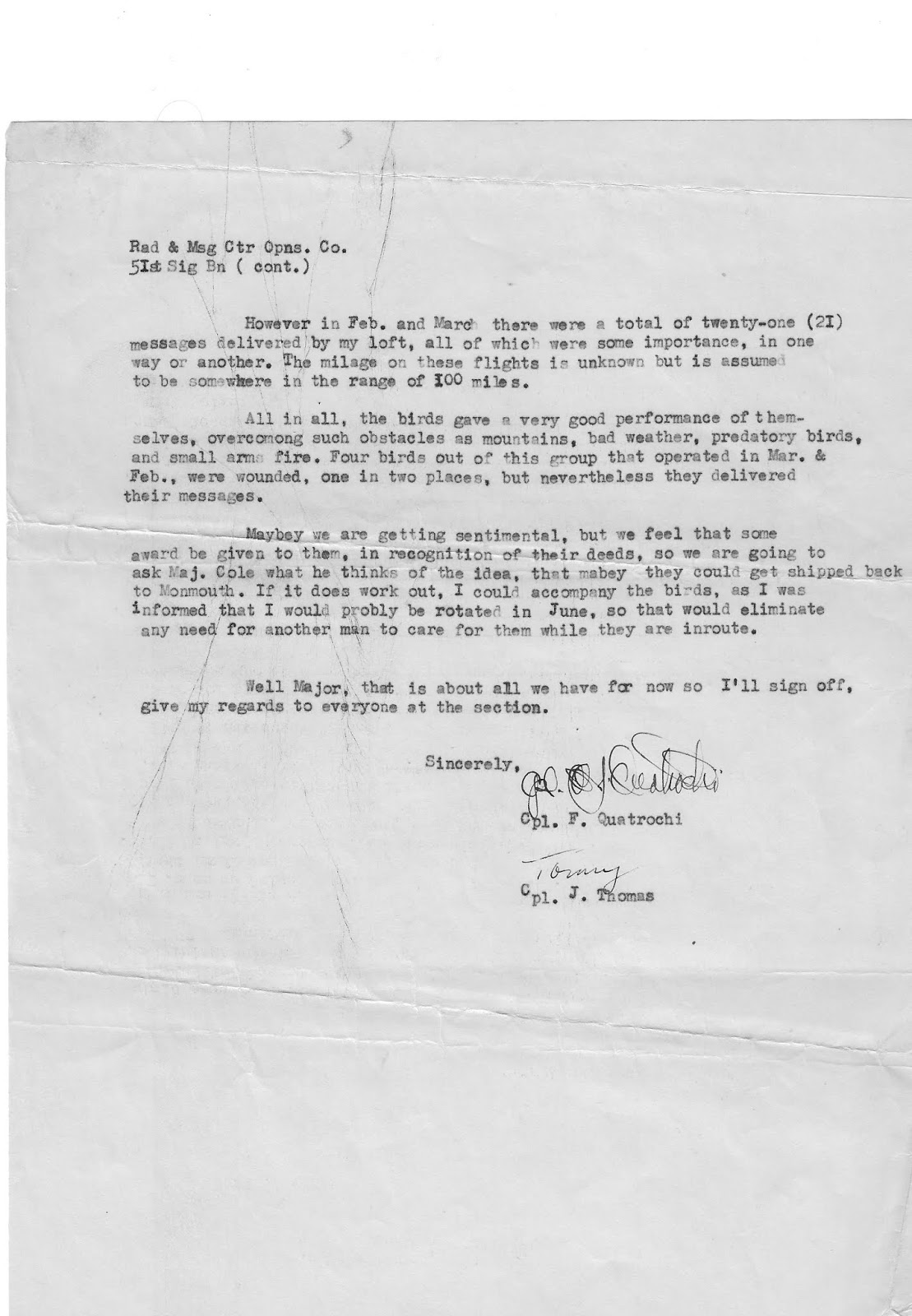 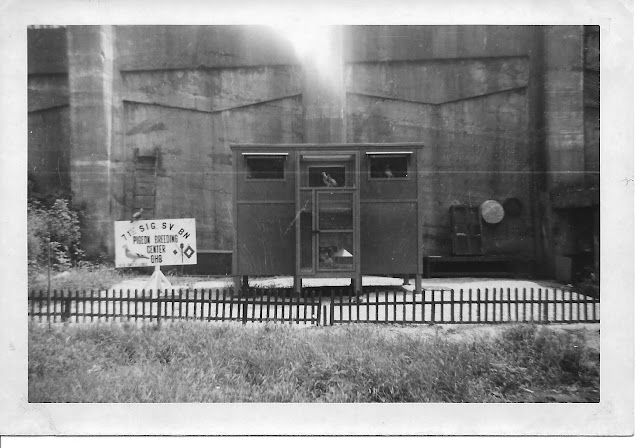 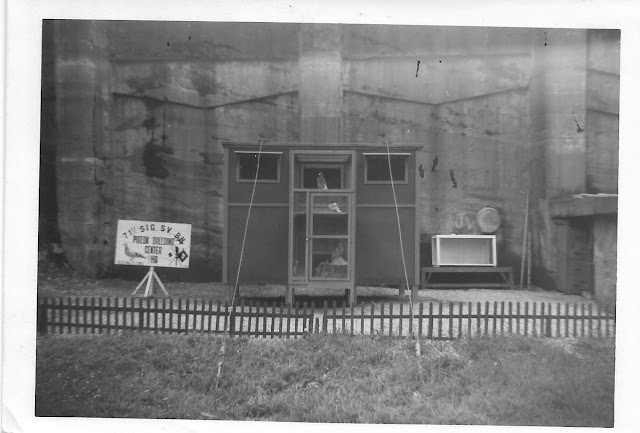 Cpl. Quatrochi next to sign outside of Tokyo loft 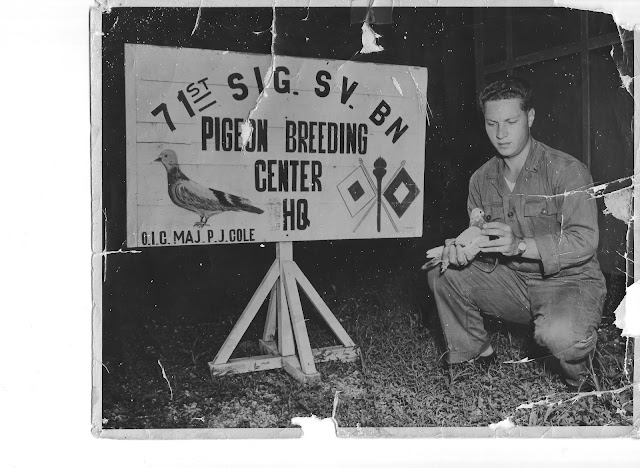 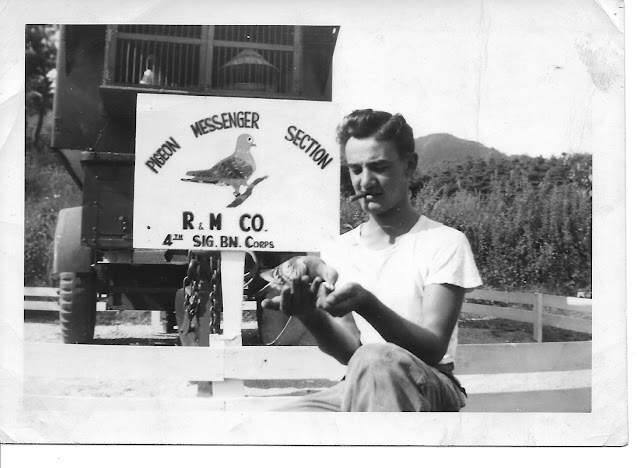 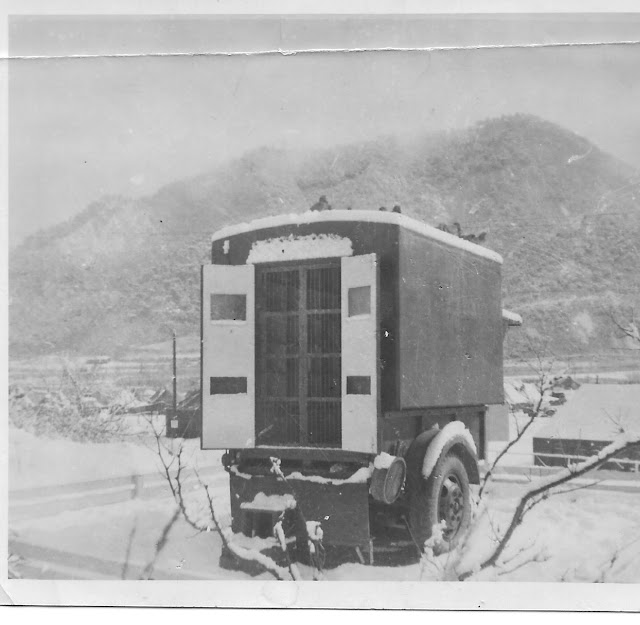 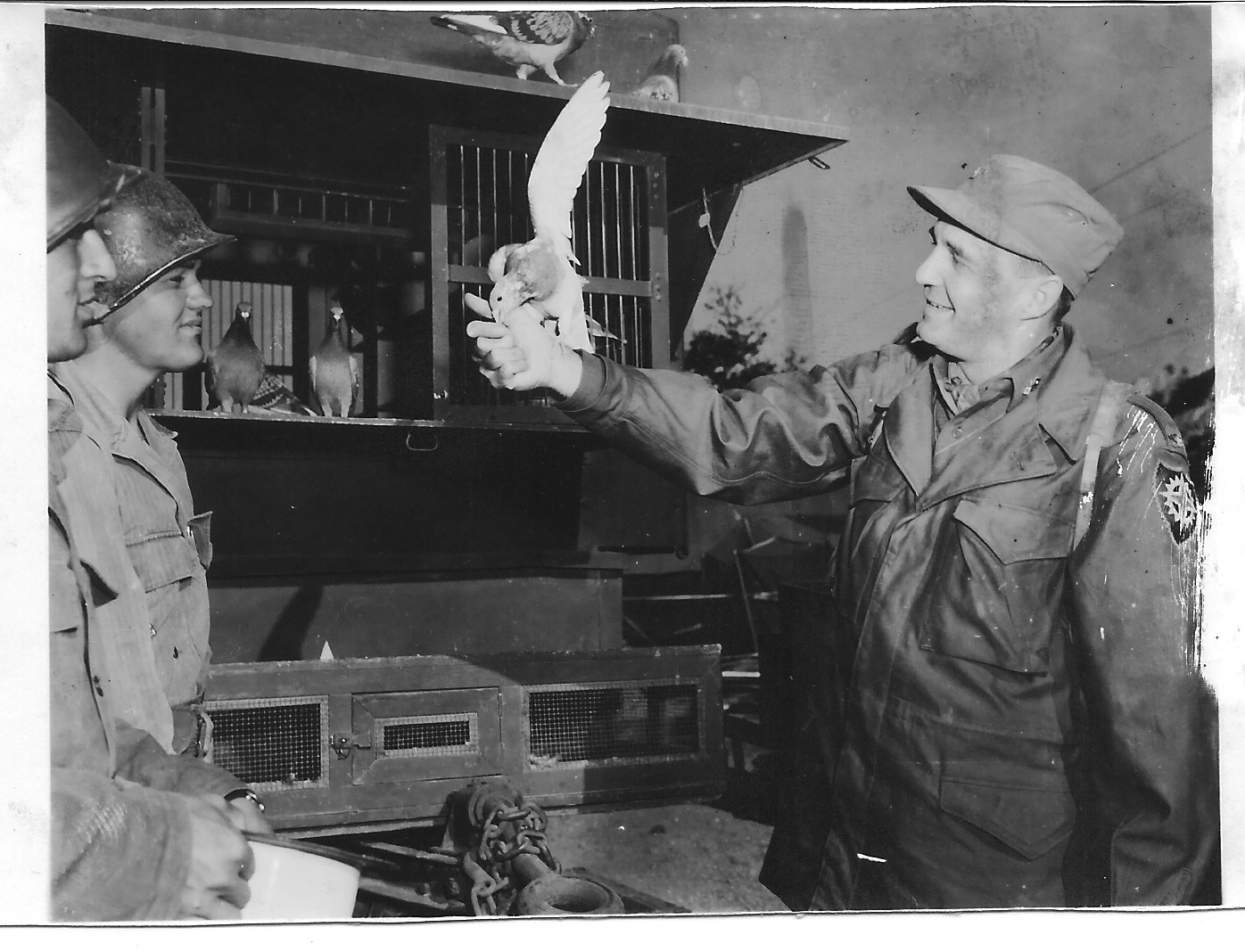 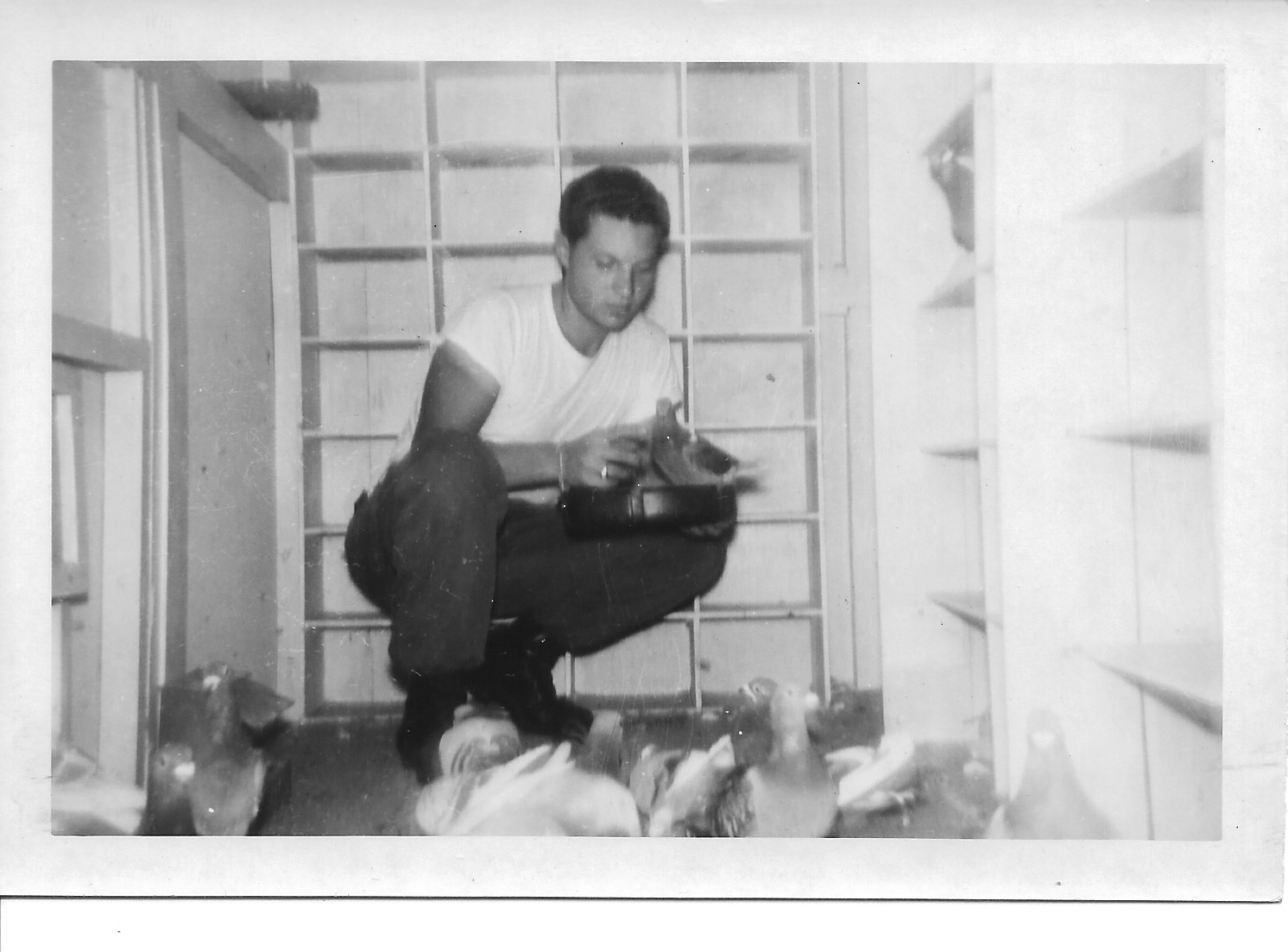 Posted by Jennifer Spangler at 1:05 PM No comments: