Next to our hearts

World War II.  Millions dead, wounded, and displaced.  The Holocaust.  The Atomic Bomb.  Parts of the world’s map redrawn in ways which still have a tremendous impact on the world’s economy and politics.  Across bodies of water and on land formations around the globe, from tiny islands to giant continents, pigeons made communication possible during World War II.
Radio technology had improved enormously since World War I but  pigeons were still needed and in fact, the use of pigeons actually increased as the war went on.  Italy, Australia, the United States, Germany, Britain, New Zealand, and Japan all had pigeon services.  Every branch of those countries militaries used pigeons and in many instances, the pigeons were the only means of communication   Britain had an extension of its pigeon service called the Middle East Pigeon Service.  Headquartered at Cairo, it had stations operating in Syria, Lebanon, Turkey, and Jerusalem.  The British also used pigeons in the Mediterranean, Africa, Burma, and India and the United States used pigeons in the Pacific theater.
Pigeons played a huge role in Allied operations to force the Axis powers out of Africa, Sicily, and Italy.  800 American pigeons landed at Safi, French Morocco in November 1942.  Lieutenant Tracey Prater, commander of the North African Signal Pigeon Platoon immediately realized that 800 pigeons would not meet the needs of the Allied forces.  He set up a breeding base at Casablanca.  Within several months, thousands of pigeons were bred, trained and assigned to combat mobile lofts.   During the 46 day Tunisian Campaign in the spring of 1943, when the Germans and Italians were finally driven out of Africa, pigeons delivered 215 urgent and secret messages.  On March 18, 1943 a pigeon named Yank delivered a message which Gordon Hayes, who served as a pigeoneer in Africa and Italy, writes in The Pigeons That Went to War, was widely believed to have “saved the life or thwarted the capture of General George S. Patton when communications between him and the 18thBritish Group were disrupted.”  Once the Allies had occupied Tunisia, Bizerte became the home of a breeding base.  Thousands of little yellow baby pigeons grew into pigeons trained for the invasion of Italy.  When the Allied invasion began, 200,000 troops and 3000 pigeons were deployed.
Just as they did on the battlefield, pigeons excelled in the world of espionage.  Operation Gibbon was a Secret Operations Executive mission to establish a secret pigeon service in Nazi occupied Belgium.  The British needed a way to get intelligence out of Belgium.  Pigeons did the job.  Resistance workers in occupied Europe received drops of pigeons from Allied aircraft and sent them out of their countries with intelligence.  The British created Operation Columba to collect intelligence from people living under the German occupation who were not spies.  Pigeons with questionnaires were dropped in small containers attached to small parachutes.  People answered the questions and sent their answers back to Britain with the pigeons.  Agents dropped behind enemy lines often preferred to communicate with pigeons rather than radios.  If agents were captured by the Germans, they wouldn’t have the radio with them as obvious evidence that they were a spy.  The first S.I.S. agent dropped into France in 1940 landed with a knife and a pigeon.  Pigeons’ abilities as navigators and long distance fliers made them such excellent spies that something called “pigeon paranoia” existed in Britain.  People believed that German agents had stashes of pigeons all over the country and were using them to send intelligence back to Germany.
Hundreds of thousands of pigeons were by our side during our greatest folly of the 20thcentury.  World War II.  Millions dead, wounded, and displaced.  The Holocaust.  The Atomic Bomb.  The map of the world redrawn.  But pigeons were not only by our side in baskets, wooden cages, and four bird carriers.  They were next to men’s hearts,  strapped across their chests in pigeon slings or drum containers as these men ran towards exploding artillery shells and enemy gunfire.  A pigeon felt a man’s thumping heart and the heaving of his chest as he took breath after breath, with each breath possibly being that man’s last breath.  Confined, the pigeon’s fate depended on that man’s choices, the choices of the commanding officer, and the choices of leaders in far away places.  In The Pigeons That Went to War, pigeonneer Gordon H. Hayes describes fighting through the Italian Alps in the winter of 1944-45.  He and his fellow pigeoneers saw men frozen in the snow, their pigeon strapped to their chest, frozen with them.  Think about being a pigeon strapped to a dead man.  It is winter.  You can’t move at all.
Posted by Jennifer Spangler at 6:35 AM No comments:

The photos were taken by Leonard Sydney Frank Walter, who served in the MEPS and
were contributed by Jane M. Barrett.
This one is NPS 42 NS 7882 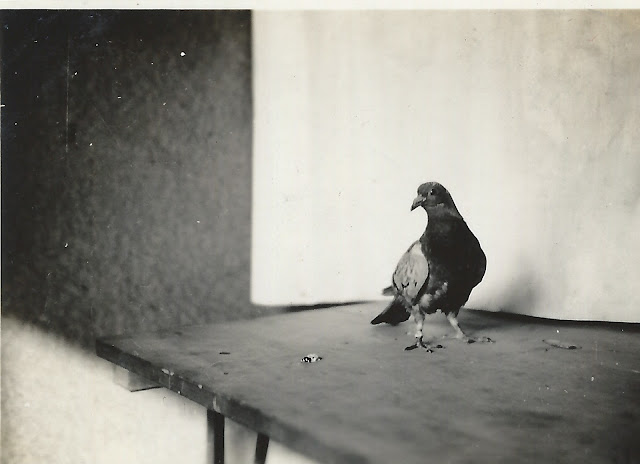 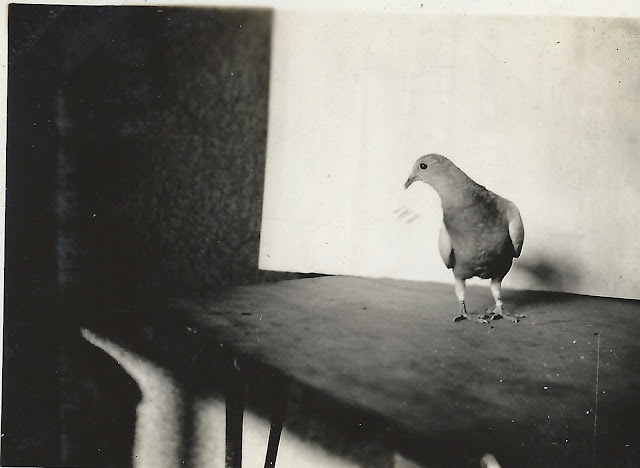 This was entitled two poor youngsters and one good one 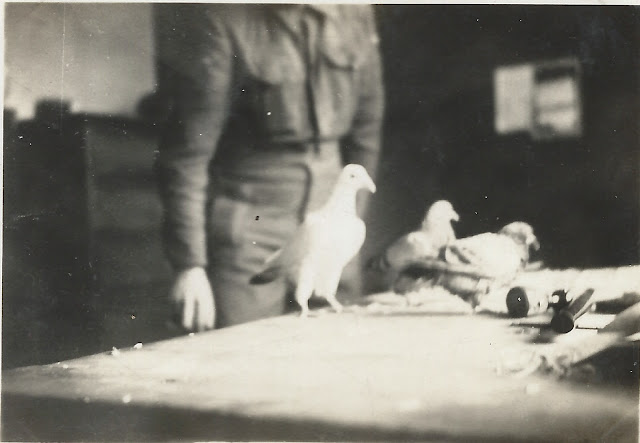 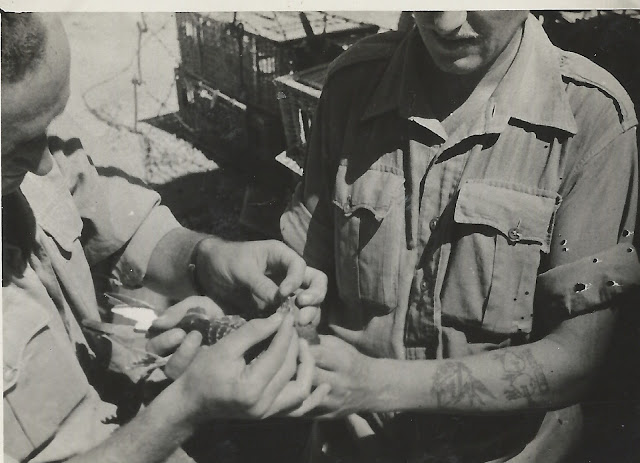 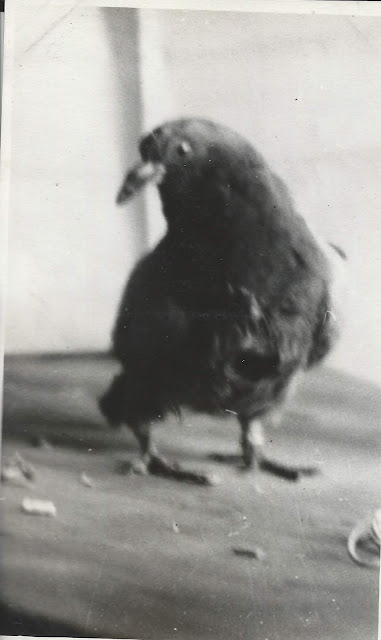 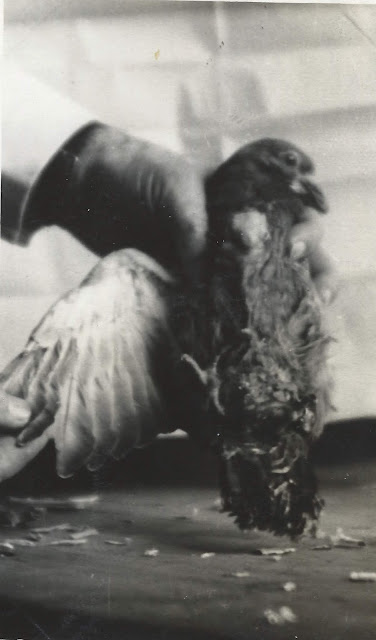 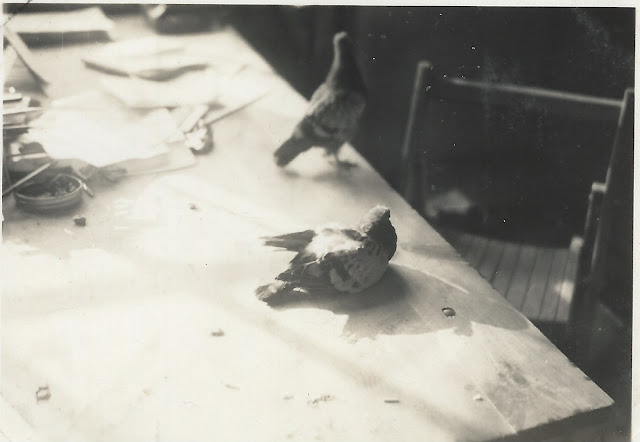 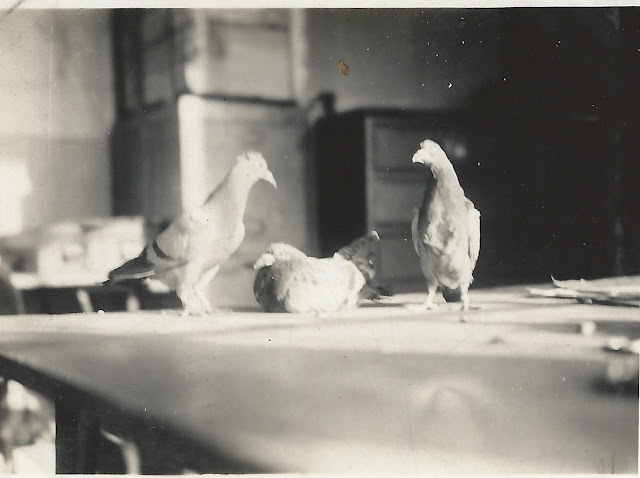 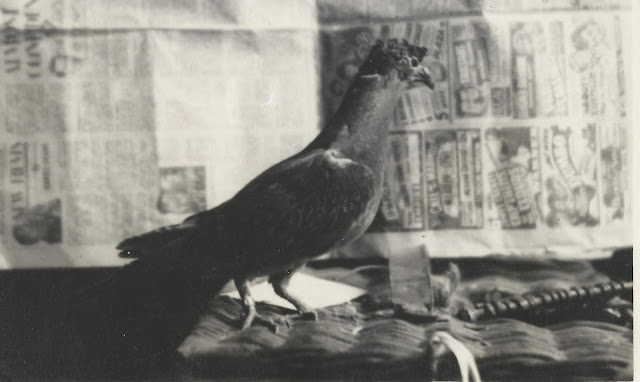 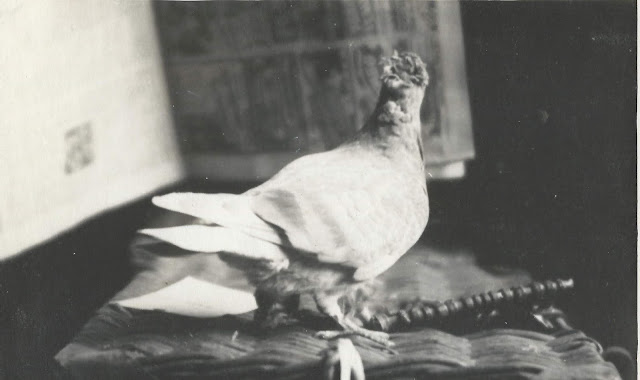 Posted by Jennifer Spangler at 1:21 PM No comments:

The Pigeons That Went to War, Gordon H. Hayes Collection 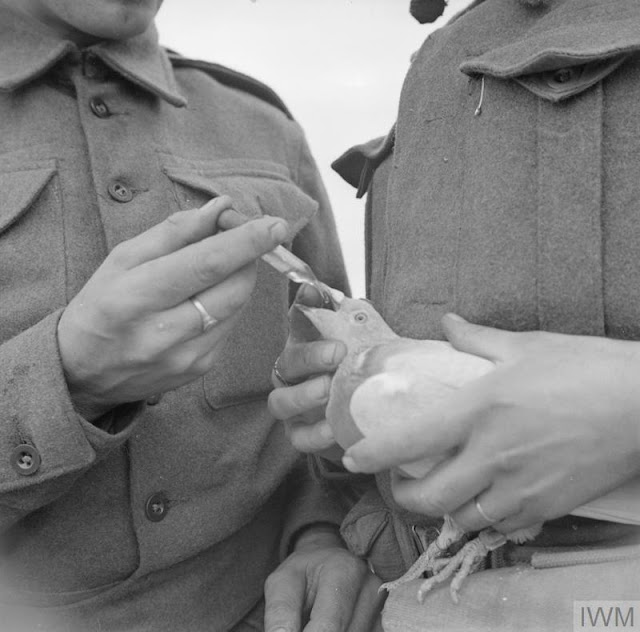 The British Army in the Italian Campaign, 1943-1945
Soldiers of the Royal Corps of Signals feeding an ill pigeon with a dose of castor oil at the 8th Army HQ at Vasto, 9 December 1943.
This particular pigeon section was commanded by Sergeant A. B. King (of Wishaw, Lancashire) and his two subordinates - Lance Corporal H. J. Jones (of Bromsgrove, Worcestershire) and Signalman J. D. Clough (of St. Helens, Lancashire). Two of them can be seen on the picture.
This section of pigeons saw a lot of action up to the date the photograph was taken. They took part in exchange of information when one of the brigades was cut off from the main body of the British 8th Army two weeks earlier. The pigeons were also used during commando raids on the city of Messina in Sicily.  © IWM (NA 9753)
Gordon H. Hayes Collection
Robin Hutton includes two chapters on the war pigeons in her book War Animals.  In one chapter is a photo of Yank and Lady Astor, two pigeons Gordon Hayes writes about in The Pigeons That Went to War.  I sent Robin a note thanking her for her great chapters and said she might like The Pigeons That Went to War.  After loving the book she did a little digging and found that the Pacific Library in Stockton, California,  holds Hayes’s papers.  Below is the link she sent me for the full citation of the Hayes collection and a list from the citation of the documents in the collection.
Finding aid of the Gordon H. Hayes Collection of Materials on the U.S. Army 209th Signal Pigeon Company
Box 1: Materials on World War II
folder 1.1
Articles on Gordon Hayes and audio tape interview, 1990-1999
folder 1.2
Gordon Hayes military papers, 1946-1946
folder 1.3
Book "Pigeons That Went to War" by Gordon Hayes, 1981
folder 1.4
Correspondence on BBC production "Inside Story: Animals at War," 1999
folder 1.5
Signal Pigeon Company rosters, 1944
folder 1.6
Documents on pigeon training, Camp Young California Desert Training
folder 1.7-8
History of the Fourth Pigeon Platoon From the 280th Signal Pigeon Company
folder 1.9
Pigeon training manuals and memoranda, 1944-1945
folder 1.10
Military documents and orders, many regarding the 6681st Signal Pigeon Company, 1942-1945
folder 1.11
Newsletters on pigeon training and the 6681st Signal Pigeon Company, 1942-1945
folder 1.12
Press bulletins, 1943
folder 1.13
Messages carried by pigeons in World War II
folder 1.14
Pigeon certificates of service
folder 1.15
Documents on individual pigeons
folder 1.16
World War II sign: "Registered Homing Pigeon Loft with the U.S. Army; Pigeon Reserve Signal Corps-These Homing Pigeons Protected by Federal Laws"
folder 1.17
Documents of German propaganda
folder 1.18
Stratton Membership card for Pigeon Society of Casablanca, Morocco
Box 2: Memorabilia and Non-World War II Pigeon history
Box 3: Photographs. Over 200 images, including many of pigeon use and training during World War II.
Box 4: Photographs, negatives, and miscellaneous documents on pigeon use and training during World War II.
Posted by Jennifer Spangler at 12:52 PM No comments:

Jane M. Barrett contributed these photos taken by her father, Leonard Sidney Frank Walter, when he served in the Middle East Pigeon Service. His album is from 1939 when he was called up to the Militia just after his 21st birthday until about 1944. Most of it is from 1942 onwards when he was sent to Egypt first as a lieutenant and then a captain but there is a bit in the central pigeon service in Edinburgh in 1941-2. He served in Egypt, Cyprus, Syria, Lebanon, Palestine, and Iraq.
This picture below is of a corridor in a loft at Aqir. The pigeon is the first one released from an aircraft around 1942-3. 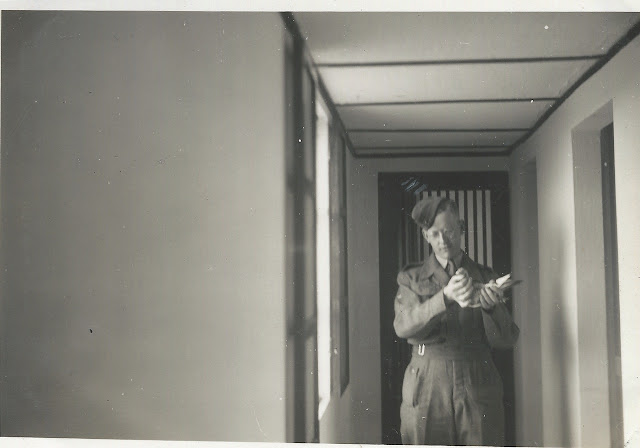 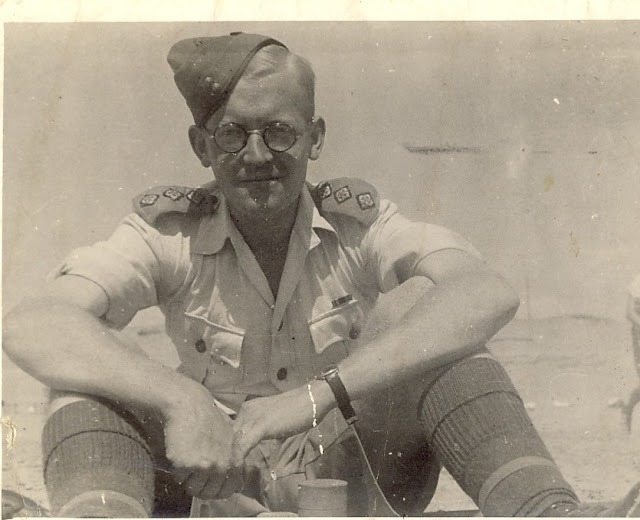 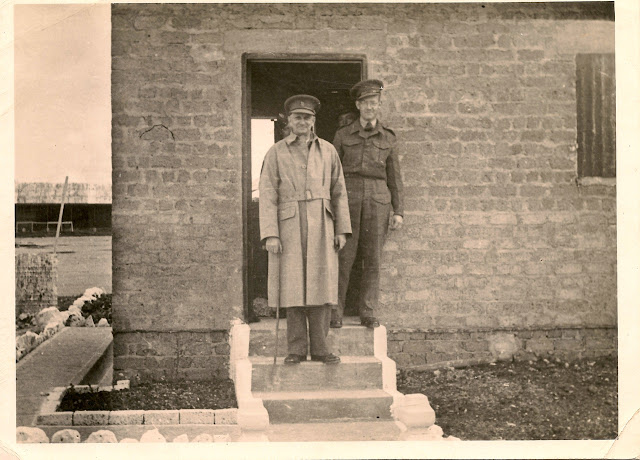 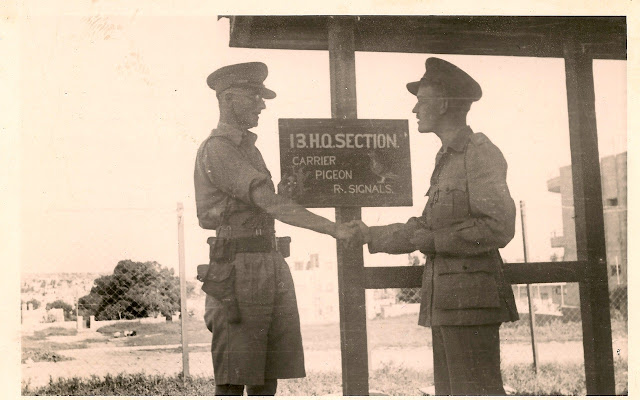 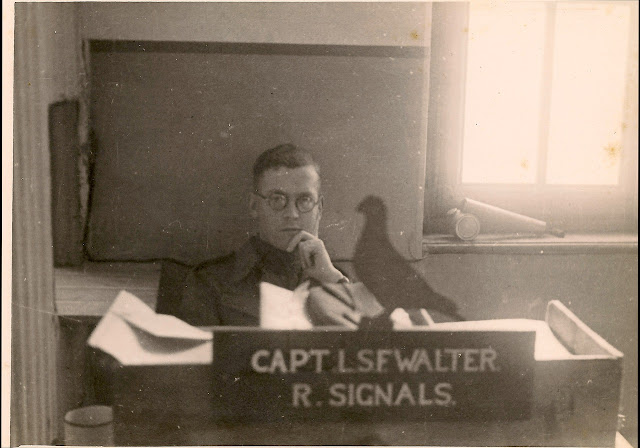 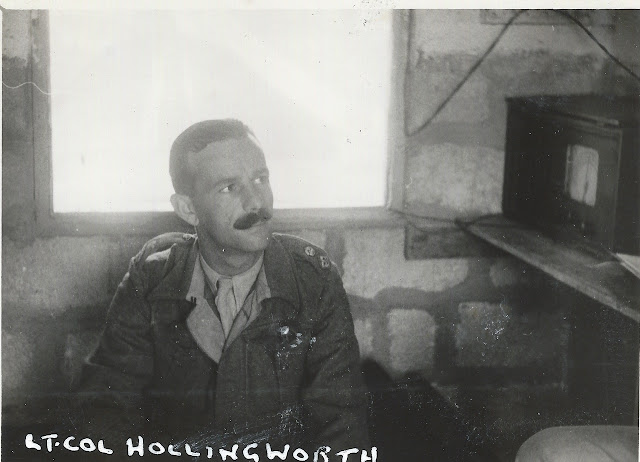 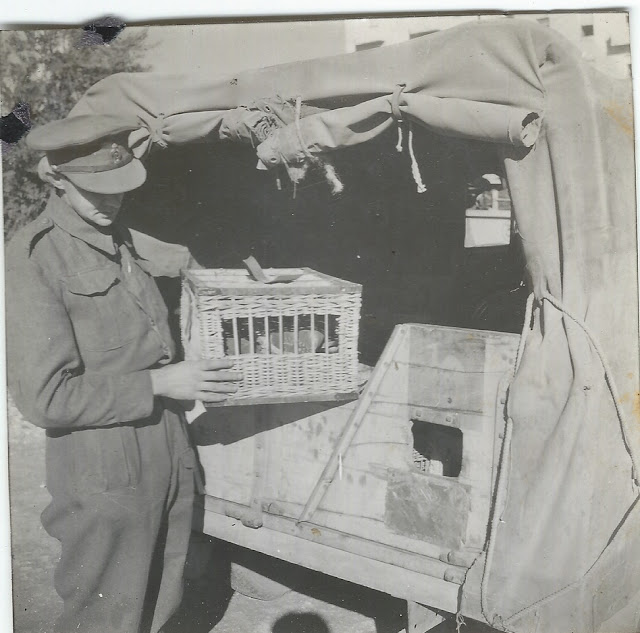 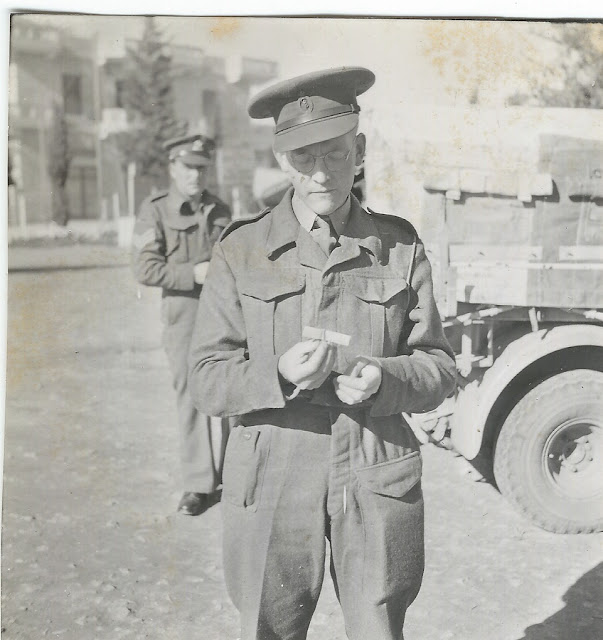 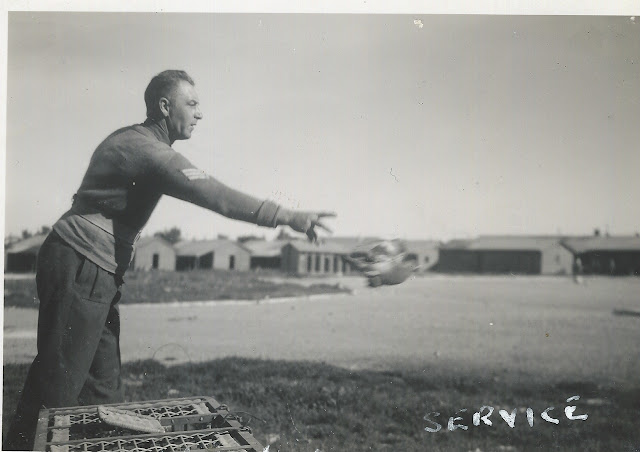 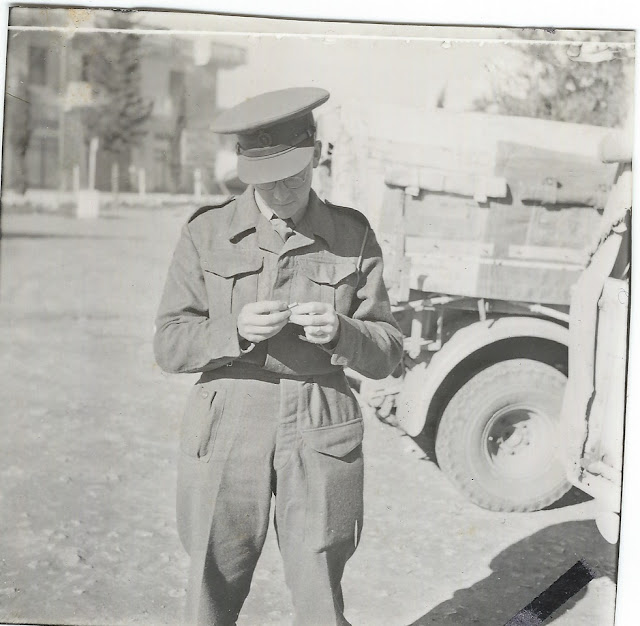 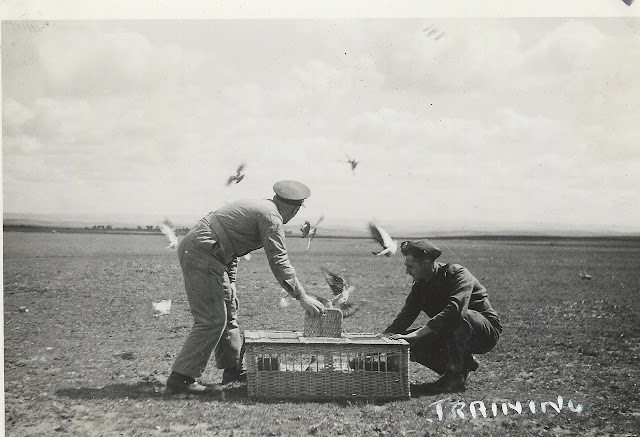 Posted by Jennifer Spangler at 7:13 AM No comments: