(Explanations have been added and appear in brackets.)
The parachuting of Dominique and I was not without hindrance. We stayed long enough in the “action station” while the plane was circling around point A. Dominique had nothing to eat and was quite nervous. He jumped first as he wished. I was obliged to follow so rapidly that my packet, falling, took from me the small cylindrical box which I carried on my chest [possibly a pigeon], as well as the little equipment attached to my left thigh. (Farewell whiskey and 48 hours of refreshment). The landing was 50m from a farm in a field of very muddy beets. Once on the ground my companion was dragged against a barbed wire fence that bordered the ground. He had the lower part of his face cut - slightly - with various bruises and swollen lips. Nothing serious, though painful, but enough to discourage him from working or taking an initiative that night. (Always send in two agents.) I naturally accompanied him to the town. God those suitcases were heavy!
About the suitcases; here is a story for the schools: CN has just arrested two Englishmen in the street, they were recognized because they did not have suitcases. As a result of the attack on Dieppe, coffee, for example, which was worth 800 francs, fell to 90 francs per kilo. However, today it is 1,400 francs, (Everyone is very optimistic).
It is difficult and often impossible to take the London broadcast. This situation exists especially since the Dieppe raid. For the messages that must reach me, I would like to receive them also by the French broadcasts of 7.15 h, and eventually a confirmation at 9.15 h. From February onwards I will listen to these broadcasts. The speaker should give the messages at the beginning, repeat them at the end and especially speak slowly. No one sees the usefulness of the little musical tune which announces "radio-Belgium".
This gives the Boches [slang for German soldiers] time to put their scrambling to the point. In my opinion, 9 pm, is a bad time for Belgian broadcasts, because we prefer to listen to the BBC in English which is very easy to get.
For my return: If all goes well I plan to leave after the reception of the material in February. I am much more known here than I thought and many know that I was in Gr. Br. Unless I hear from you, I will leave by the SASUOE [his code for Suisse/Switzerland.] However, I would love to come back by plane. There are vast and deserted plateaus in the Ardennes. In this case, other services would give me documents to carry.
The film I had was very useful and made a huge pleasure as well as brochures. Send me other films. You cannot imagine the pleasure that seeing films of this kind has made at the present time. Mine has already been shown in our main cities.
17.1.43.[January 17, 1943] I still hope to find my third branch and to have these documents sent out in January.
I did not manage to get OKOYDXO [code for DENERET] to take care of the third branch. He says he is too old and since controllers regularly check his belongings, he finds it too dangerous. I think he's afraid. He could not help me find people who loved the same sport as him. Also I was not ready at your first message of 14, crt; besides that night there was a strong storm here.

Mrs. CXIAKN [code for CAUVIN’s mother] is very seriously ill - angina - and I could not see her. Happily her smart and intelligent daughter-in-law did not make contact with the others. I obviously did not add it into the organisation because the police come to the occupant every week and she is frequently questioned. Her radio set was confiscated and her property sequestered. She still has permission to live in the house. Her whole family is watched over because of a stupid transmission from her husband.

From the list you gave me, SRESHRA [SULTENS] and VOSEBIRS [VANBEERS] were taken hostage in Huy. VIMBRUNECJEXL [VANOMMESLAGHE] is too changing of humour, so I have not enrolled him.
I have talked to about sixty persons such as bankers, business directors, teachers, tramway receivers, coffee boys, etc. all of them deplore the great number of attacks committed since the New Year. Life becomes more and more difficult and the Boches [slang for German soldiers] more and more brutal. Almost every day they raid the streets and search Germans as well as Belgians. Even the pocket knives are confiscated. I have seen people who had to take off their shoes.
In my mission, it was agreed that on the 2 & 16 of each month there would be a message for me. There were 6 in total. By not receiving them I made, as you might think, a very villainous figure because I had notified some collaborators of these broadcasts. Would you like to send them from 2 March? The first two sufficient: I have dined with ... on behalf of the office.
Do you want to let ALIDRAFORADLTRT [FERNARD DELZAERT] know that he should not come to join his old friends here.  Because of him they had difficulties with the authorities. They are all healthy.
I would very much like you to ask the secretary of the CPNVXXUKUEUEIT [CAPT REERMAEKERS] not to forget to write to my wife and my family as promised me.
4.2.43 [February 4, 1943] Mrs. CXIAKN [code for CAUVIN’s mother] is getting better.
From German source:
1) There are 290 deserters of the Wehrmacht in Brussels.
2) Several Wehrmacht officers have been withdrawn from their radio sets, but continue to listen to BBC programs among friends.
3) According to several officers, the Germans would not defend Italy in case of defeat in Africa, but would retreat to the Brenner Pass.
6.2.43. [February 6, 1943]  Finally, I’ve found the third branch. Would like to receive 4 pistols for my committee next month, preferably of F.N. The biggest pleasure you can make me and this would be as necessary, is to send 12 bike tires (660 x 50 and 700 x 25). It does not matter if the brand is English.
DUVAL AFFAIR.
Medical.
The wounded man arrived at the Hospital Centre.
1 An infected open fracture, L/3 lower right thigh.
2. A double spiroid fracture of the left humerus, fracture closed but with eclament of the disphyse.
3 A relatively good general condition despite anaemia at 2,800,000 and a temperature of 38 degrees C.
A Kirschner stirrup was placed to try to reduce the thigh but there was considerable muscular intrusion. The general state rapidly declining one decides to attempt an osteosynthesis.
The rachianesthesis will dominate the presence of blood in abundant quantities in the cephalorachidian fluid. (A later X-ray did not show any bony lesions of the spine.) They were obliged to engrave the wound with ether, which obliged them to practice an amputation in the centre of fracture. The infection returning about 20 cm along the vasculo-nervous sheaths.
His general condition improves very fast and the arm is placed along the body with a continuous traction which was very badly supported. Actually, the left arm is in excellent position, the wound follows the daily sensations of mobilisation. The radial nerve is intact.
The right thigh is almost cleaned. An attempt to suture the stump is very soon envisaged, the trauma of the column is still not explained. The blood shows 4,300,000 red blood cells.
[Report on DUVAL’s accident during parachute drop]
How did it happen (by DUVAL)
Finding myself number 1 in the "action station,” I waited for the green signal, when all of a sudden the package suspended above the hole detaches, remains a fraction of a second obstructing the opening and then disappears pulling me after it with a violent shock. Henri witnessed this false maneuver, understood that I would not escape, nevertheless he followed me immediately. He pretends that shortly before the package was detached, one of the aides standing behind me, had, at a jolt of the plane, grabbed a hand to the packet. Probably it was that involuntary but fatal act that caused the accident. It is also possible that the package was badly fixed.
I just felt a violent shock and I found myself hanging, my left arm dangling and my right leg hanging. The landing worsened the fractures. I sent my comrades in search of help. Around 6 o'clock in the morning I told him to leave me and take the documents. I was helped and collected towards 8 o'clock. I was far enough from two agreed places. I asked for help from ESENYGLSO [Brussels] where I was embarked on. During all this time I remained without care and almost smiling. It was this period which caused the amputation.
I am pleased to inform you that I have been able to contact valuable collaborators and that my job is done normally.
Having, by chance, been able to contact Carol, I can assure you that it has been of a particularly precious help to me.
Given my physical condition I ask to fly with Carol who will help me. I can leave towards the end SKCXYXXX [February] or [March]. I hope firmly that you will not make me wait here any longer.
Would you let me know as well as Carol if you are coming to take us?

The four preceding pages are, therefore, the report prepared by the service organiser for sending in February. I give it to you to follow procedure only. Duval has actually recovered from his accident, it [his leg] is evidently amputated, but he progresses well.
Thanks to Bernard O'Connor for contributing Ceysen's first pigeon message from Operation Gibbon.
Bernard O'Connor lives near RAF Tempsford, Bedfordshire, the World War II home of the RAF's Special Duties Squadrons which, on moonlit nights on either side of the full moon, parachuted supplies to the resistance groups in occupied Europe, dropped (and landed and picked up) secret agents) as well as carrier pigeons with questionnaires for people to complete and send back to Britain. He has researched and published numerous books about its history; the role of the Special Operations Executive (SOE); the Secret Intelligence Service (MI5, MI6, MI9, MI14); the Abwehr (German Intelligence Service); the women agents infiltrated behind enemy lines; the SOE's sabotage school and its 'graduates'' sabotage operations and three books on pigeon spies. 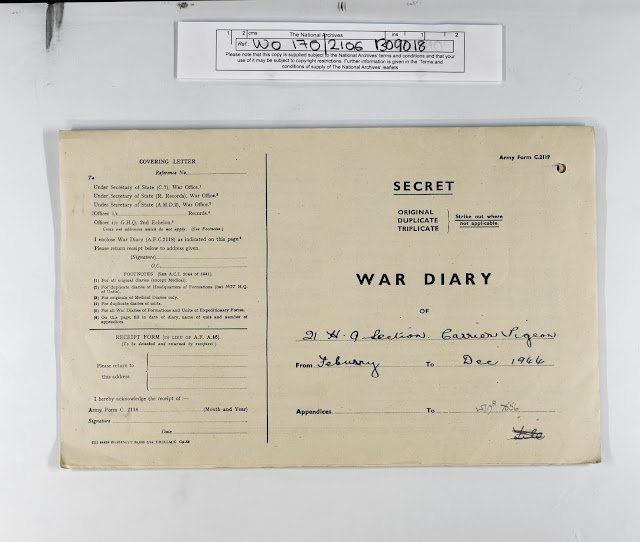 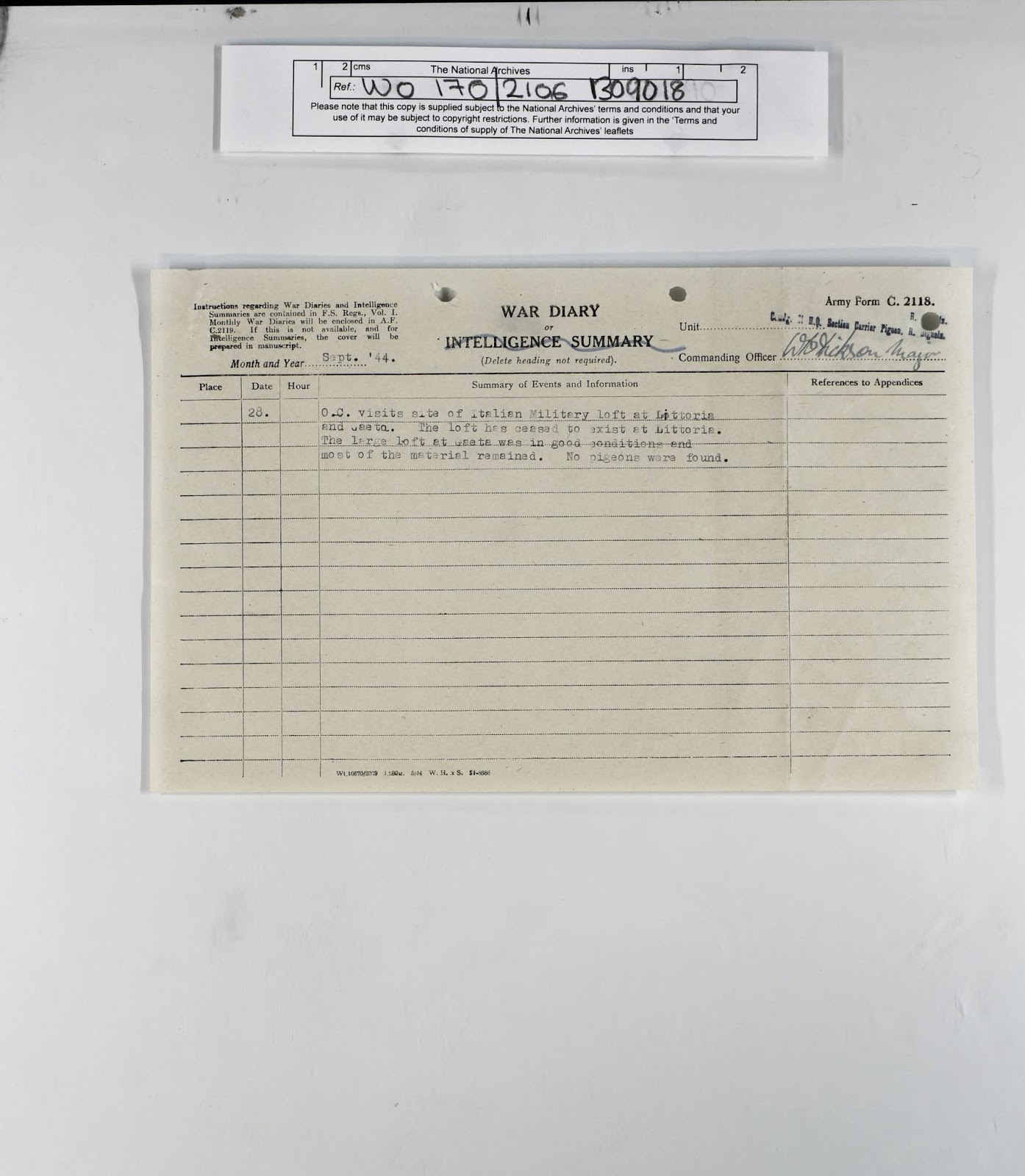 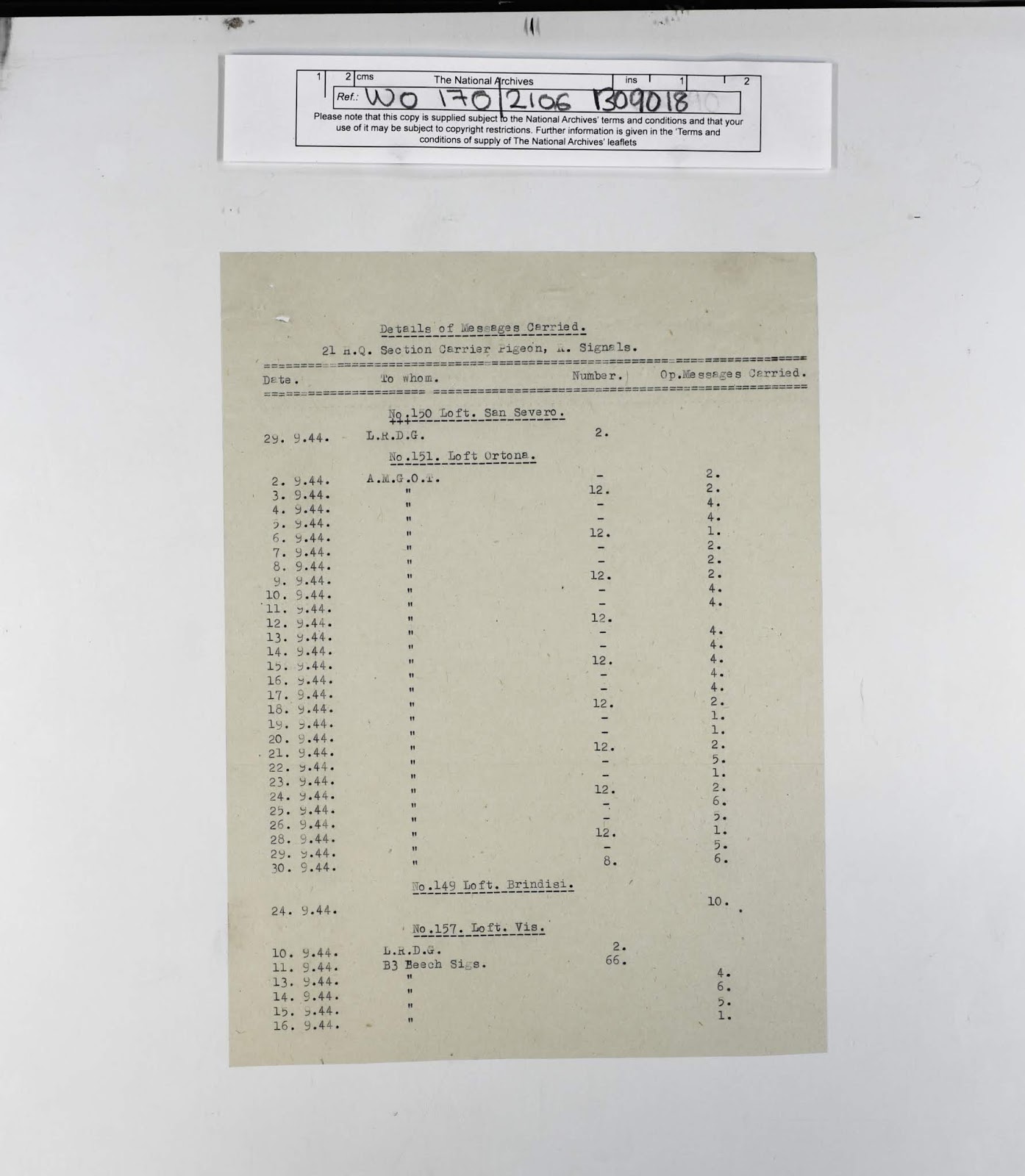 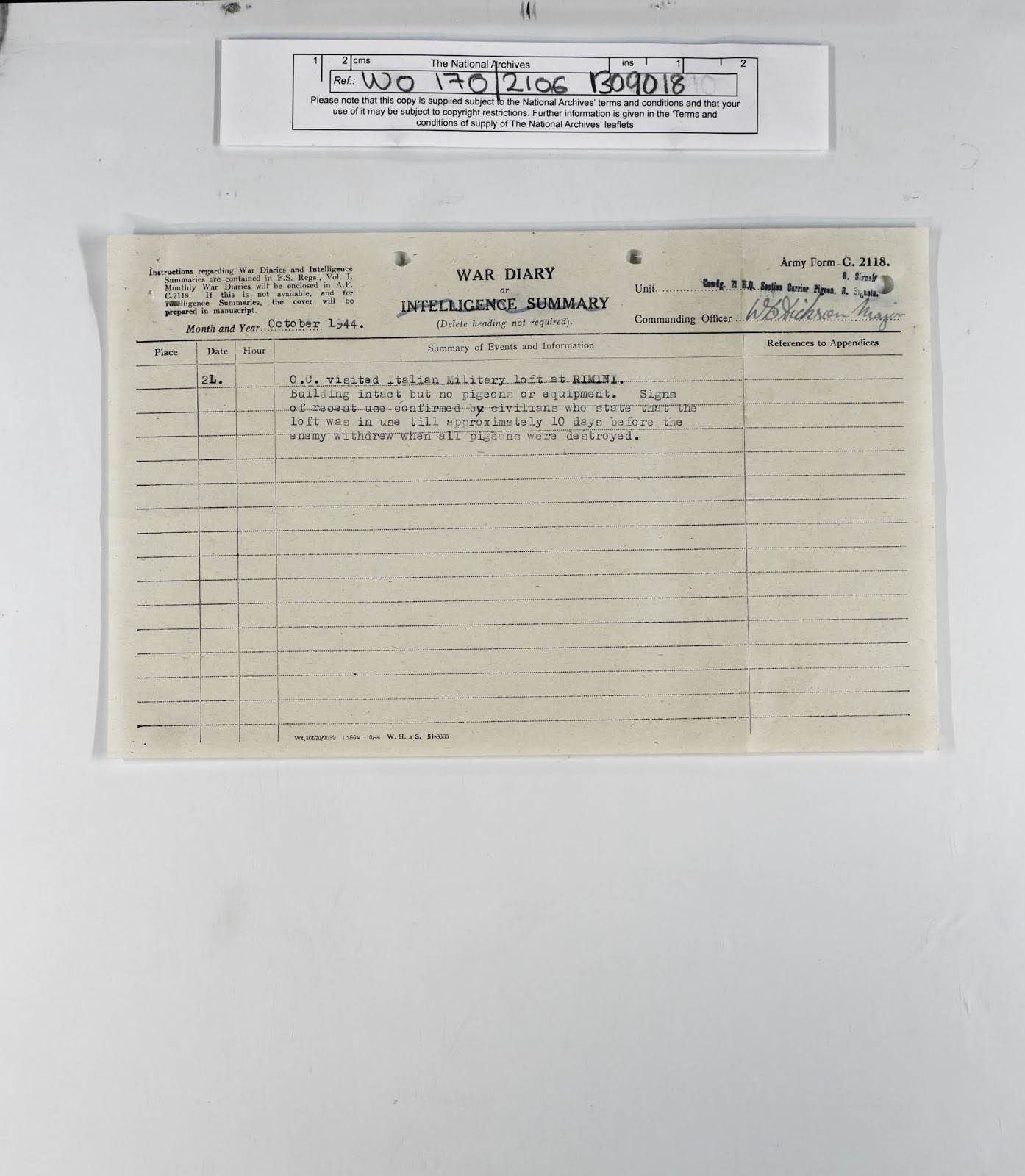 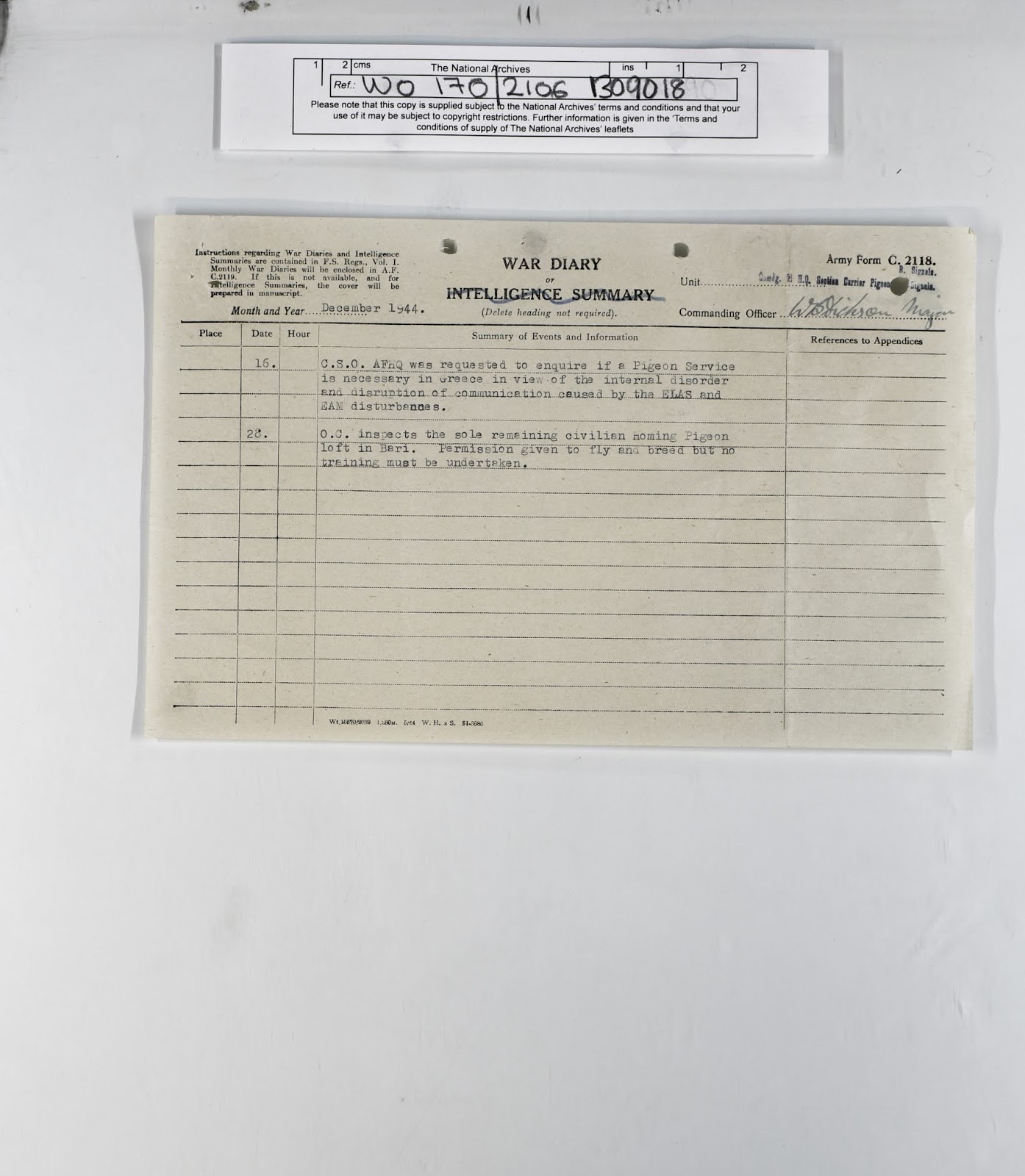 Posted by Jennifer Spangler at 12:27 PM No comments: